Nabucco, King of Babylon, has laid siege to the city of Jerusalem. Zaccariah, the High Priest, encourages the Hebrew people to take refuge in Salomon’s temple and assures them that it is still possible to negotiate for peace since the enemy’s daughter, Fenena, has been captured. Zaccariah assigns her to Ismael, nephew of Jerusalem’s king.

What the High Priest does not know, however, is that Fenena and Ismael have known each other for some time and are in love. Ismael had been Ambassador to Babylon and Fenena had saved him. In the same way, now, the young man is trying to free his beloved, but she is blocked by a group of Babylonian warriors dressed up as Hebrews and led by Abigail, Nabucco’s other daughter, a woman set on deception and with a lust for power. She, too, loves Ismael, but love for her is, above all, a political question, something to be used in exchange for her love. She accuses the young man of betrayal and reminds him that she has already offered him the kingdom of Babylon in exchange for his love. Notwithstanding, she is willing to renounce her revenge if Ismael leaves Fenena. He refuses saying he does not fear death but asks only for mercy on his people.

In the meantime, there is mayhem outside. Other Hebrews have taken refuge in the temple and when Nabucco raids it, Zaccariah makes an extreme attempt to save his people: he threatens to kill Fenena but Ismael blocks him and hands the young girl over to her father. At this, Nabucco gives orders to destroy the temple.

Inside the Palace at Babylon, Abigail finds the document which reveals that she is not Nabucco’s daughter, but an adopted slave. The High Priest of Belo tells Abigail that Fenena, who has been nominated her guardian by her father, is freeing the Hebrew prisoners and explains this is why the Babylonians are in revolt. He adds that he has worked out a plan: he has sent out rumours that Nabucco has died in battle so that the people acclaim her, Abigail, queen. In her obsession for power, Abigail is willing to do anything in order to take possession of the throne.

Zaccariah, having been taken prisoner by the Assyrians, enters another room of the palace followed by a Levite who bears the tablets of the Law. The priest prays. The Levites curse Ismael because he has betrayed them, but Anna, Zaccariah’s sister, defends him saying that, since Fenena has converted to the God of Israel, he has saved a Hebrew. The situation now becomes critical: Abigail enters and expects to take possession of the crown.

In the hanging gardens of the Palace of Babylon, Abigail lets the people worship her and she receives all the honours of the authorities of the kingdom. The High Priest tells her that the moment to eliminate all the Hebrews has arrived, starting with Fenena who has abjured the Belo cult.

Nabucco arrives, clearly confused. Abigail seizes this opportunity to intimidate him and make him sign the death warrant for the Hebrews. In a moment of lucidity, though, the King remembers that even Fenena has chosen to be a Hebrew. At this, Abigail rejoices perfidly. Nabucco now regains his memory and orders the woman to prostrate herself before him, after all, she is only the daughter of slaves. This is exactly where Abigail has wanted to lead him: she produces the document which proves her low origins and rips it up, enjoying every moment of her triumph. Then she has Nabucco arrested. At this point, Nabucco pleads with her to save, at least, Fenena, thereby recuperating through paternal love, the loftiness of spirit he had lost when he had compared himself to God. Abigail is delighted to see her adopted father humiliated and defeated.

In the meantime, on the shores of the Euphrates the Hebrews, chained and forced to work hard, think nostalgically about their lost homeland. Once more, Zaccariah consoles his people, urging them to have faith and prophesying their liberation. Babylon will fall, he says.

Nabucco wakes up from a nightmare. Cries from outside are heard: the crowd weeps as Fenena is taken to the scaffold. He is powerless to do anything, he is a prisoner. He kneels down and asks for pardon for his arrogance from the God of the Hebrews and promises to convert. Divine grace restores his mental faculties. Having regained lucidity and the strength to react, he asks for a sword, grips it and orders the warriors who have remained faithful to him to follow him. The moment for the liberation of the Assyrian people has come and with it, Fenena’s salvation.

We hear a funeral march coming from the hanging gardens and the Hebrews condemned to death, are brought in. Zaccariah comforts Fenena. When Nabucco bursts onto the scene, the statue of the god Belo falls and the prisoners are freed. Nabucco urges them to build a new temple on top of the ruins of the temple he destroyed in Jerusalem. Abigail, on seeing her plan disintegrate, poisons herself and in her death-throes, asks Fenena and Jehovah to forgive her.ness from Fenena. Zaccariah blesses the King, redeemed by his new faith.

“Va, pensiero, sull’ali dorate” and relight the flames of the first masterpiece by Giuseppe Verdi. Thanks to this spectacular production by Arnaud Bernard (inspired by the uprisings of Italy’s Risorgimento), Nabucco will take over the Arena stage from 25th June to 3rd September 2022, revealing its full epic and musical power in 8 performances. Have you ever dreamed of attending a colossal live show in period costume? Now you can do it. 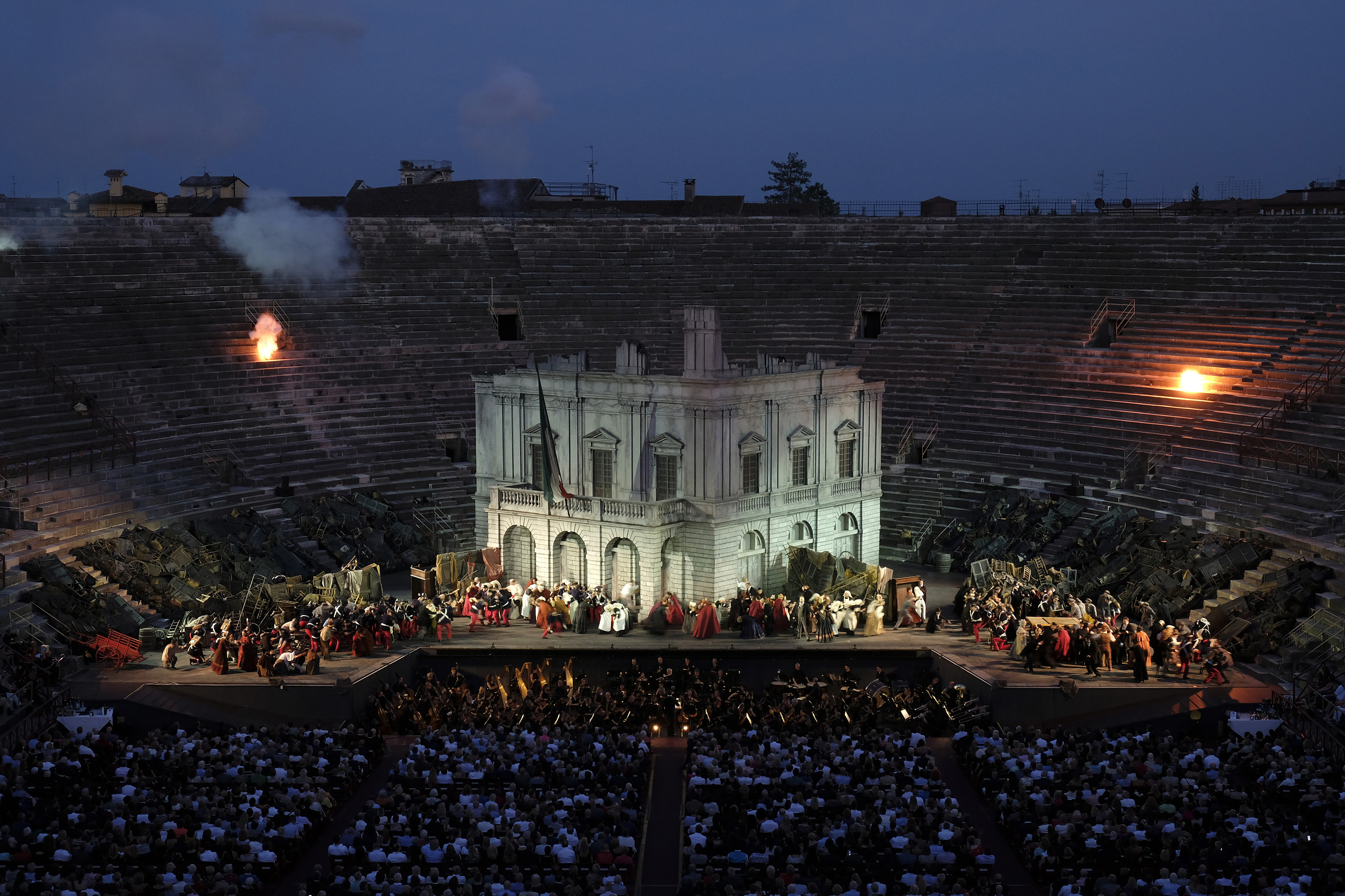 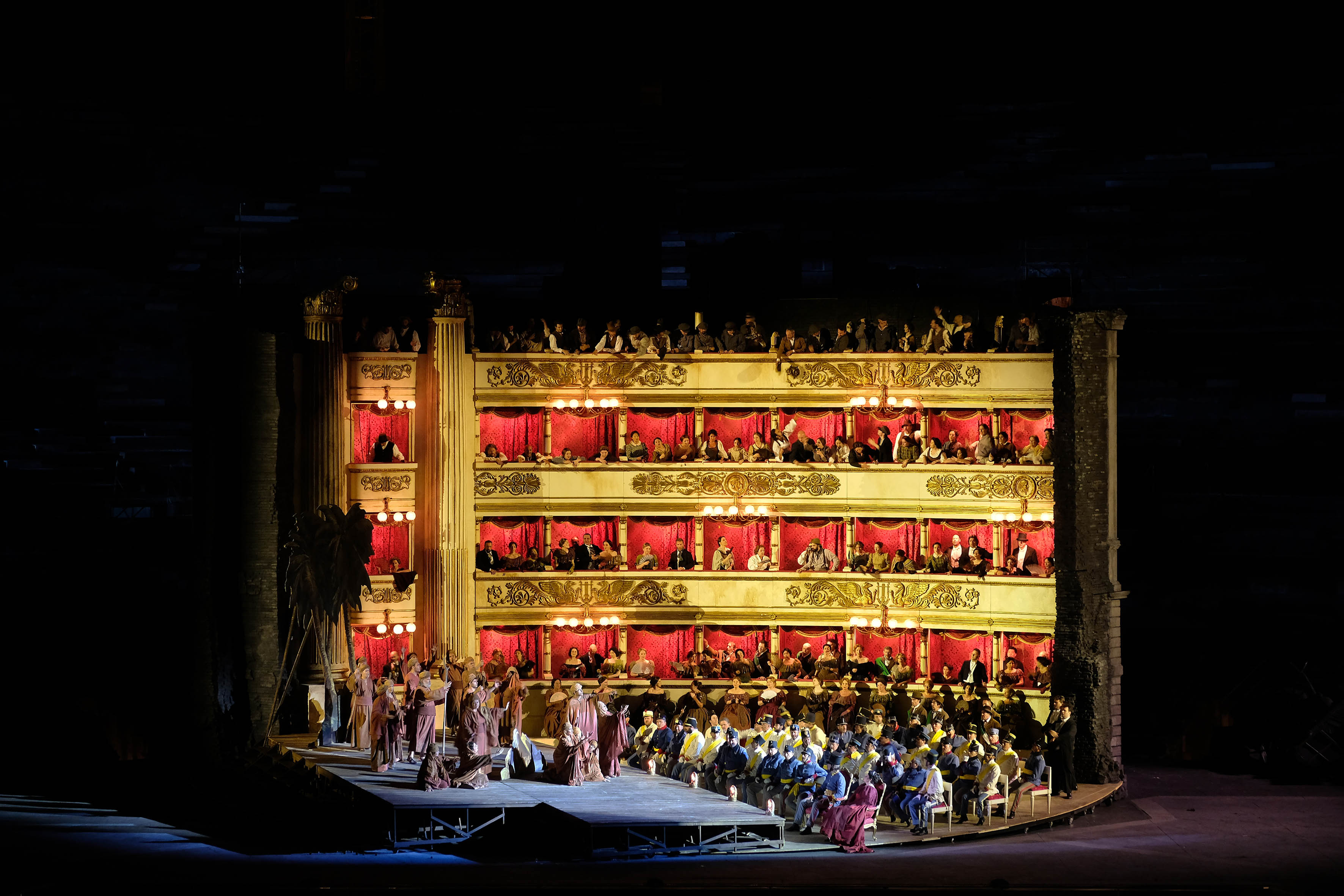 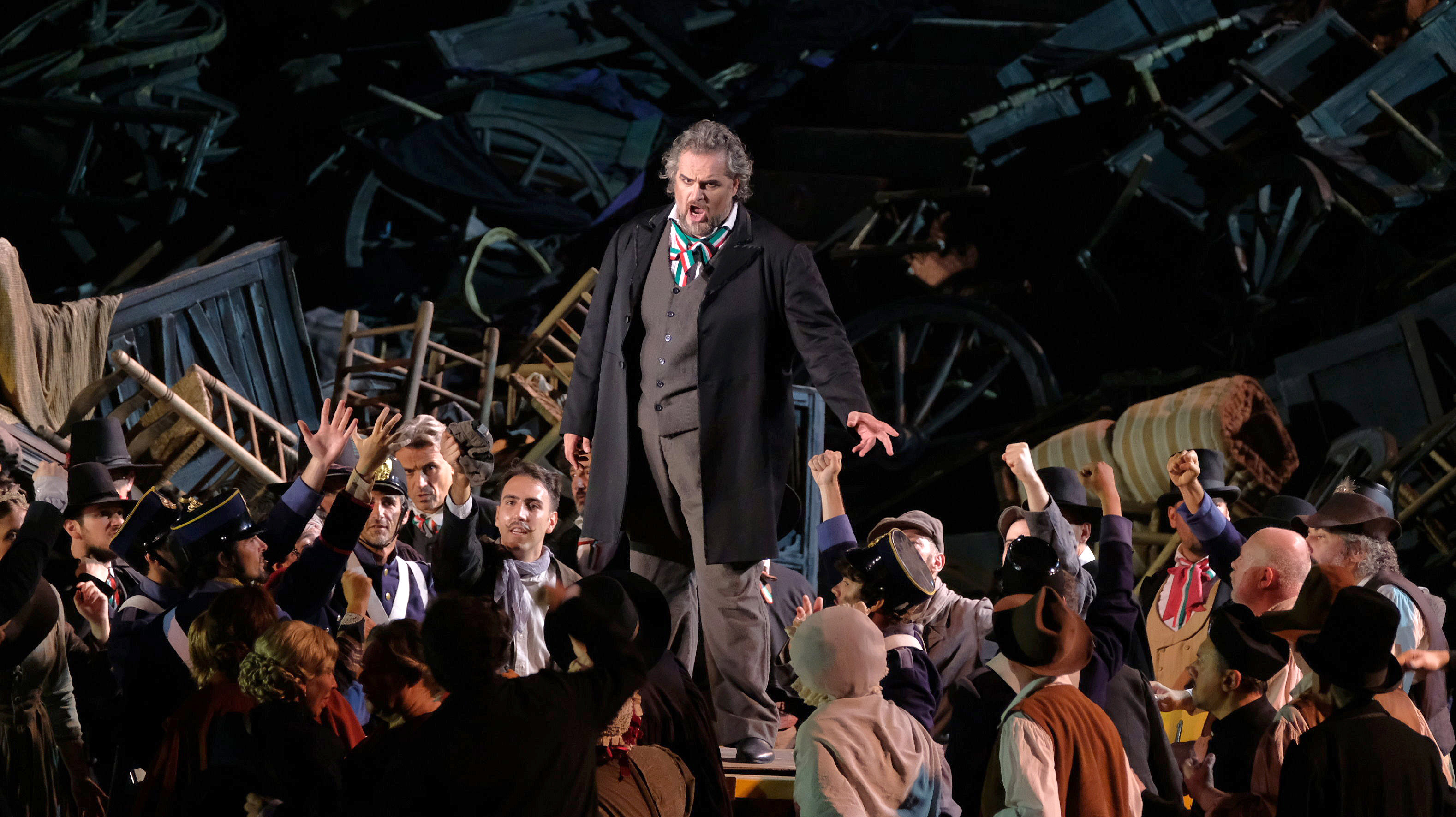 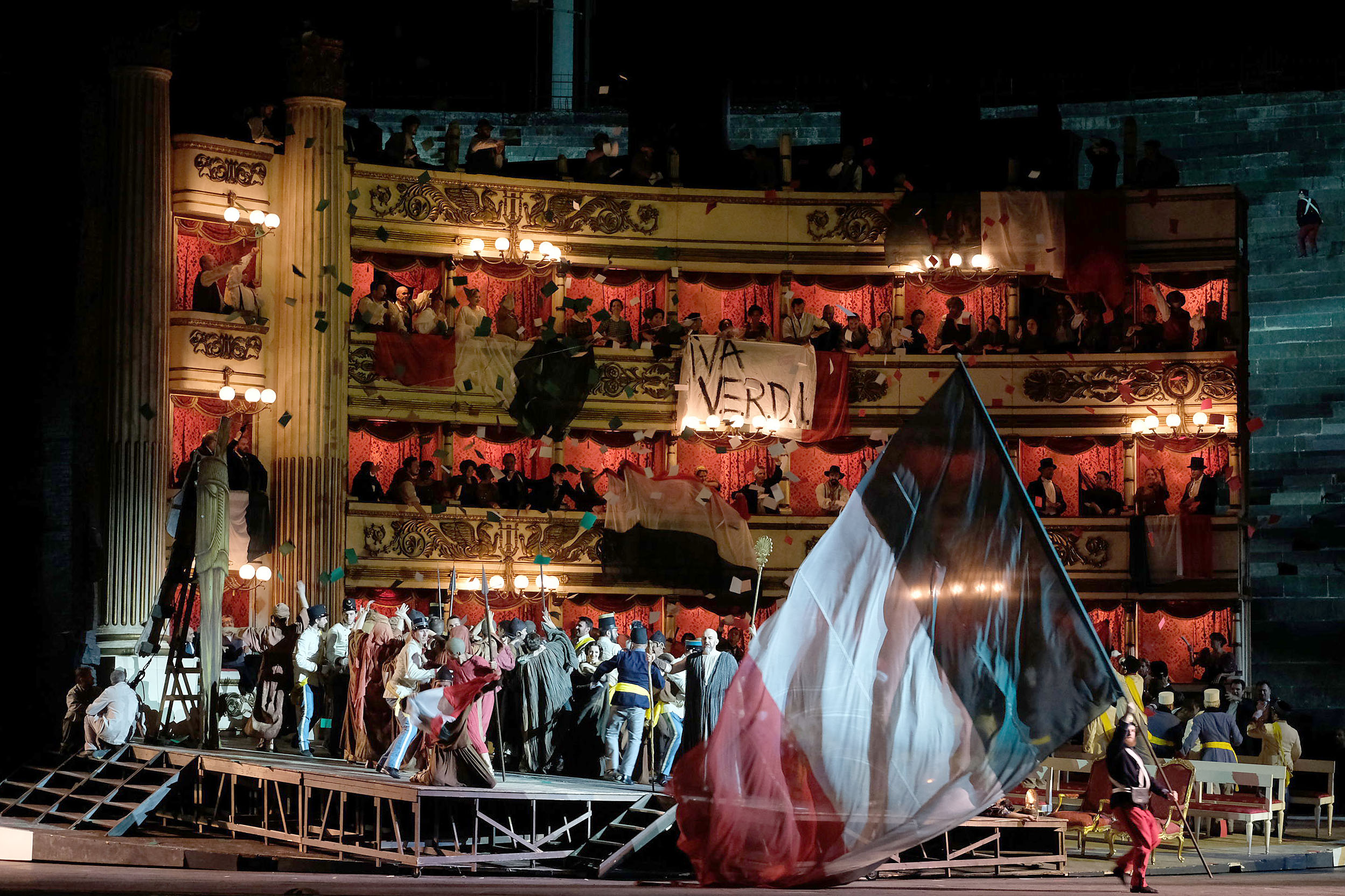 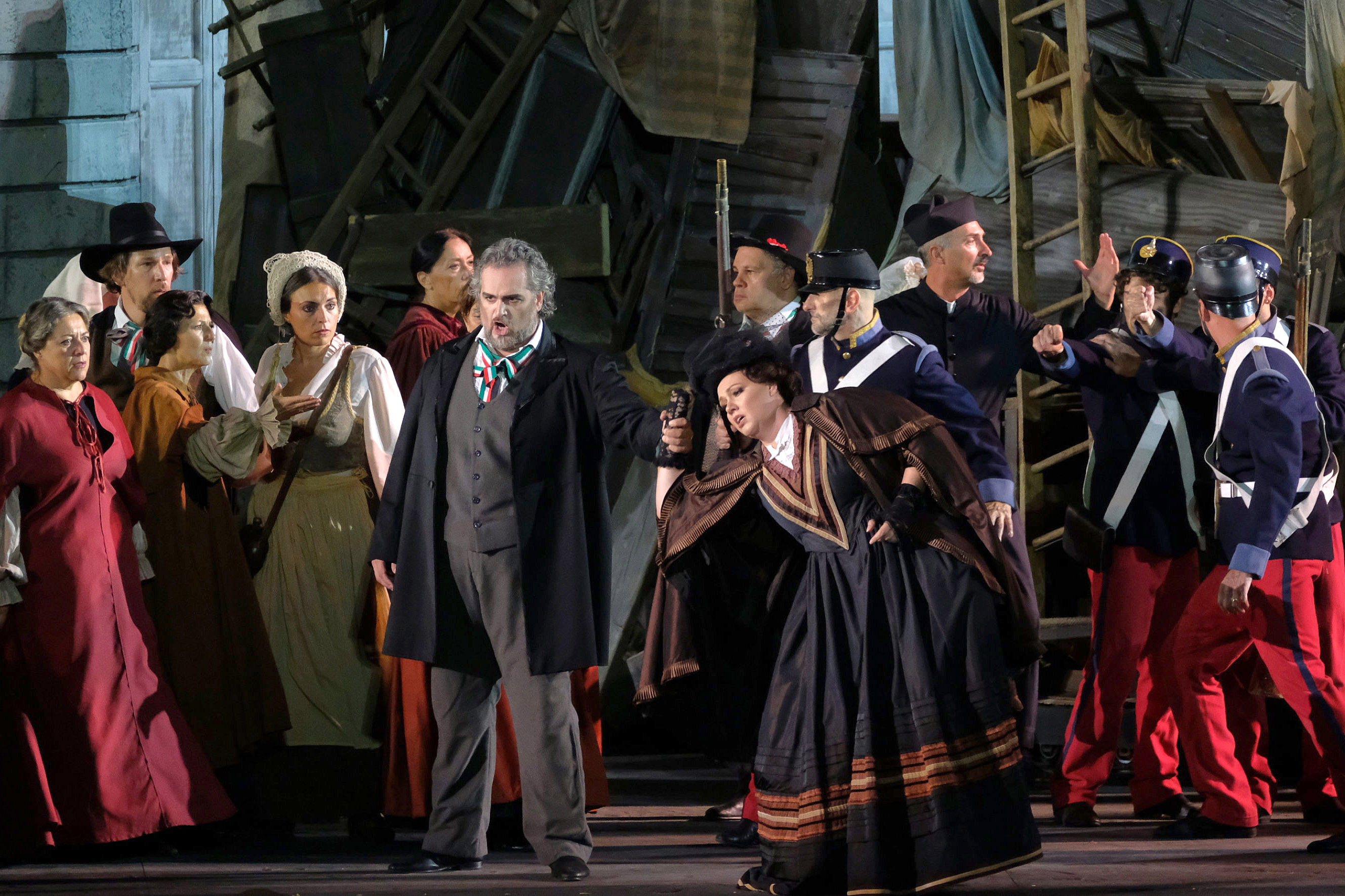 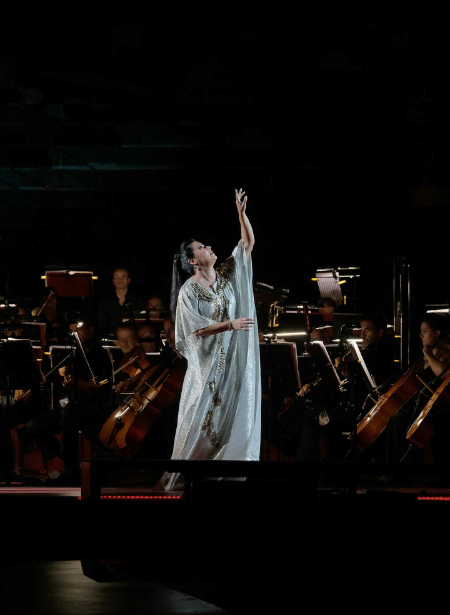