Opera in 4 acts by Giuseppe Verdi

Aida by Giuseppe Verdi on stage at the Arena di Verona.

There is wind of war in Memphis. Ramfis, the High Priest and secret power of the State, informs Radames, captain of the guards, that the Ethiopians are about to invade Egypt. The idea of a war stimulates Radames, a man of ambition and courage. He hopes the god Isis will appoint him supreme commander of the army. He dreams of glory, and everything seems possible. War, for him, is also an occasion to appear valiant before the eyes of the woman he secretly loves: Aida, an Ethiopian slave in the service of Amneris, the Pharaoh’s daughter.

The Egyptian princess is also in love with Radames. Intuitive by nature, though, she immediately suspects she has a rival in this slave but prefers to conceal her jealousy with double cunning. Meanwhile, Aida’s heart is heavy with anxiety: her country is at war, yet at the same time, a love links her to a new world.

A fanfare sounds and a majestic choral scene overrides individual conflicts and aspirations. The leaders of the State meet to plan a war strategy. The King and Ramfis stand out as personalities who have no individual identity, personifying a power which crushes anyone who stands in their way.

After a messenger arrives to confirm that the Ethiopians have invaded under the leadership of King Amonasro, the Pharaoh announces that the Oracle has chosen Radames to be commander-in-chief.

Everyone is thrilled and urges him to return home victorious. Aida, in private, grieves: she hopes Radames will be victorious but at the same time, wants her father, Amonasro to destroy the Egyptian troops. Desperate, full of repressed anxiety, she prays to the gods for mercy.

The rite of investiture as commander-in-chief takes place in the Temple of Vulcan. Against a background of singing and dancing, a silver veil is placed on Radames’s head while Ramfis hands him the consecrated sword. The commander-in-chief has received a blessing, hence it is a just war

albeit set on destruction.

Amneris is in her apartment preparing for Radames’s triumphant return. Her double-cross with Aida proceeds astutely. She is friendly to her but leads their conversation to the issue most dear to her, putting the slave’s feelings to the test: Radames, she informs her with studied indifference, has been killed in battle. Aida’s desperation at hearing this news now confirms Amneris’s suspicions. She reveals the deception and admits the truth: Radames is alive, but she, too, is in love with him. Furious, the Pharaoh’s daughter threatens revenge.

In Scene 2 private fates are forgotten as marches, dances, hymns and fanfares welcome the victorious army at Thebes. Radames enters at the end of the triumphal procession. The King promises to grant all Radames’s wishes. The Ethiopian prisoners file past, too and Aida recognizes one of them, her father Amonasro dressed as a simple officer who speaks on behalf of all the hostages, asking for clemency. Ramfis invites the King to show no pity while Radames requests that the prisoners be granted life and freedom. The King reaches a compromise: Aida and Amonasro will remain hostages in Egypt as guarantors of peace, all the others will be released. The marriage of Amneris to the triumphant Radames is announced. In an atmosphere of general repudiation, Amonasro meditates revenge. Aida and Radames are desperate. With private sentiments and great collective emotions manipulated and organized according to a fanatical ritual, any kind of conciliation is impossible.

At night, on the banks of the Nile, Amneris goes into the temple of Isis to pray. It is the eve of her wedding. Aida also arrives, secretly: she has an appointment with Radames. Filled with anxiety and nostalgia, Aida evokes the wide open spaces of her homeland, sings her love for her lost country, symbol of a promised happiness that has vanished.

Amonasro appears unexpectedly, and organizes an ambush against the Egyptian army. He has realised that Aida and Radames are linked and he takes advantage of his daughter’s feelings to work out a strategy. With deceptive sweetness, he promises her return home, glory and love but he poses a condition: her loved one must divulge the route of the Egyptian troops. Aida tries to oppose this but her father’s curse and her sense of guilt should her people be massacred lead her to giving in. Plagiarised, Aida faces the meeting with her loved one, explaining the reasons for which the only solution possible is her escape. She manages to convince him, using seduction and sensuality. Radames reveals the military plans she wants but Amonasro, inopportunely, appears and reveals

his identity, frustrating everyone.

The situation worsens. Amneris, who has overheard the conversation, comes out of the temple, crying of betrayal. Amonasro hurls himself at her to kill her, but Radames blocks him, hands over his sword to Ramfis and has himself arrested. Aida flees with her father. Her dream of love is now shattered forever, on the banks of the Nile.

In a room of the King’s palace, Amneris is now in despair. Her pride hurt, she is torn between

anger and love, between her wish to save Radames or to ruin him. In the end she decides to save him. She has him brought before her and begs him to prove his innocence: she will ask the King for mercy.

Radames refuses, claiming he has betrayed unintentionally and, having lost Aida, says he would prefer to die. He resists Amneris’s flattery, even when she reveals that Aida is still alive and she promises to save him if he renounces his love for the slave girl.

Radames is taken back to prison. The priests come to give their verdict. Ramfis’s accusations can be heard in the distance, in contrast with the silence of the accused followed by the diatribe of the holy ministers. The sentence arrives quickly: Radames is guilty and will be buried alive. Amneris seeks to save him, but her intervention is of no use in the light of the cruelty of the priests, the real bearers of power. Not even the Pharaoh’s daughter can oppose the repressive apparatus of the State, the implacable mechanisms of military and religious organisation.

In the Temple of Vulcan, the priests bury Radames under a tombstone. Aida, however, is already hiding there, having entered the crypt secretly, to die alongside her beloved. He is desperate; she sees the angel of death approaching and with it, eternal joy. The temple is now invaded by light

and a defeated Amneris prays for peace. A single, sinister note sounds repeatedly. In the obscure underground where they are buried, Aida and Radames are immersed in a sea of musical light, heralding another world beyond this where they will enjoy the happiness that has been denied them on Earth. 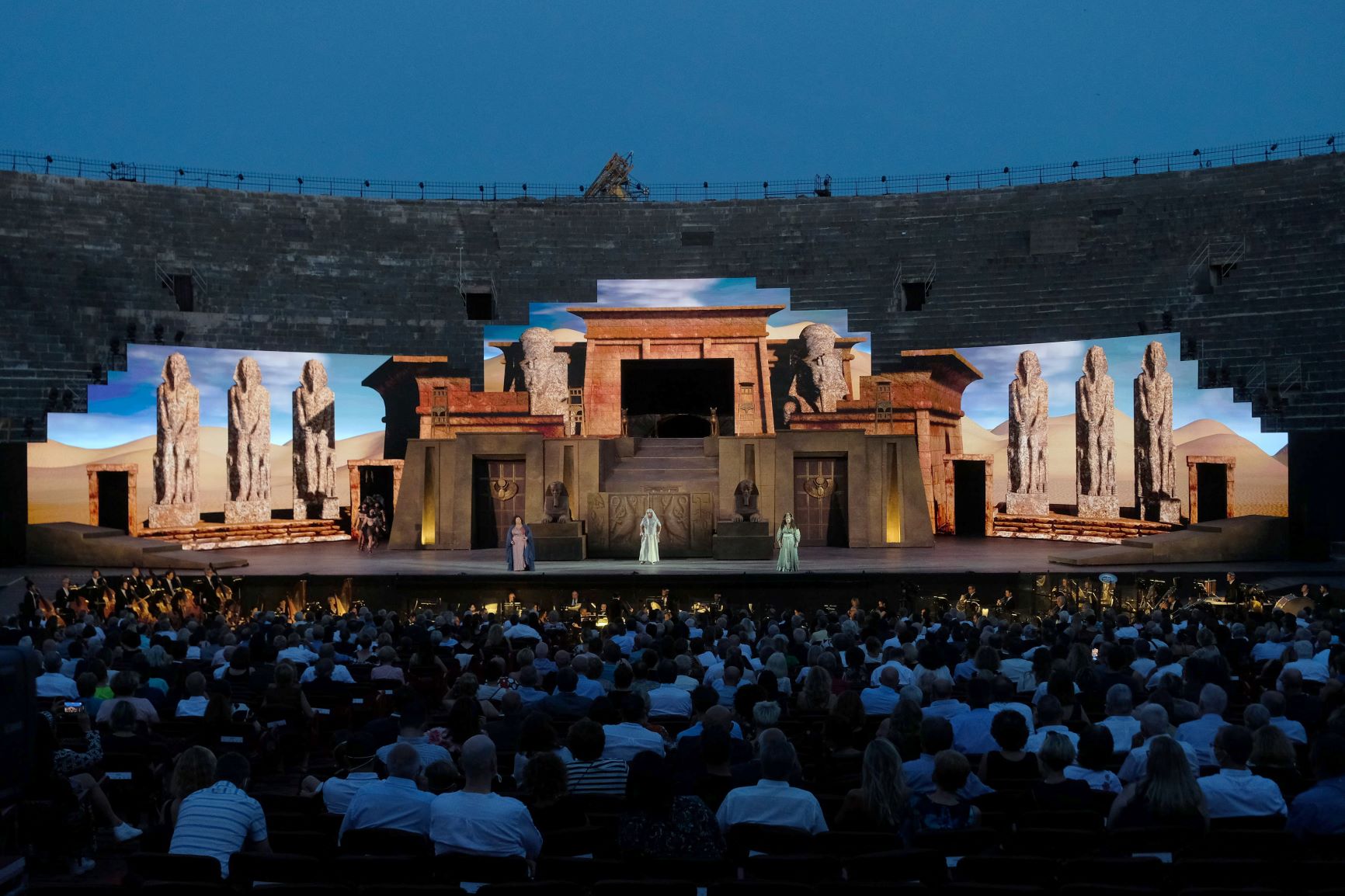 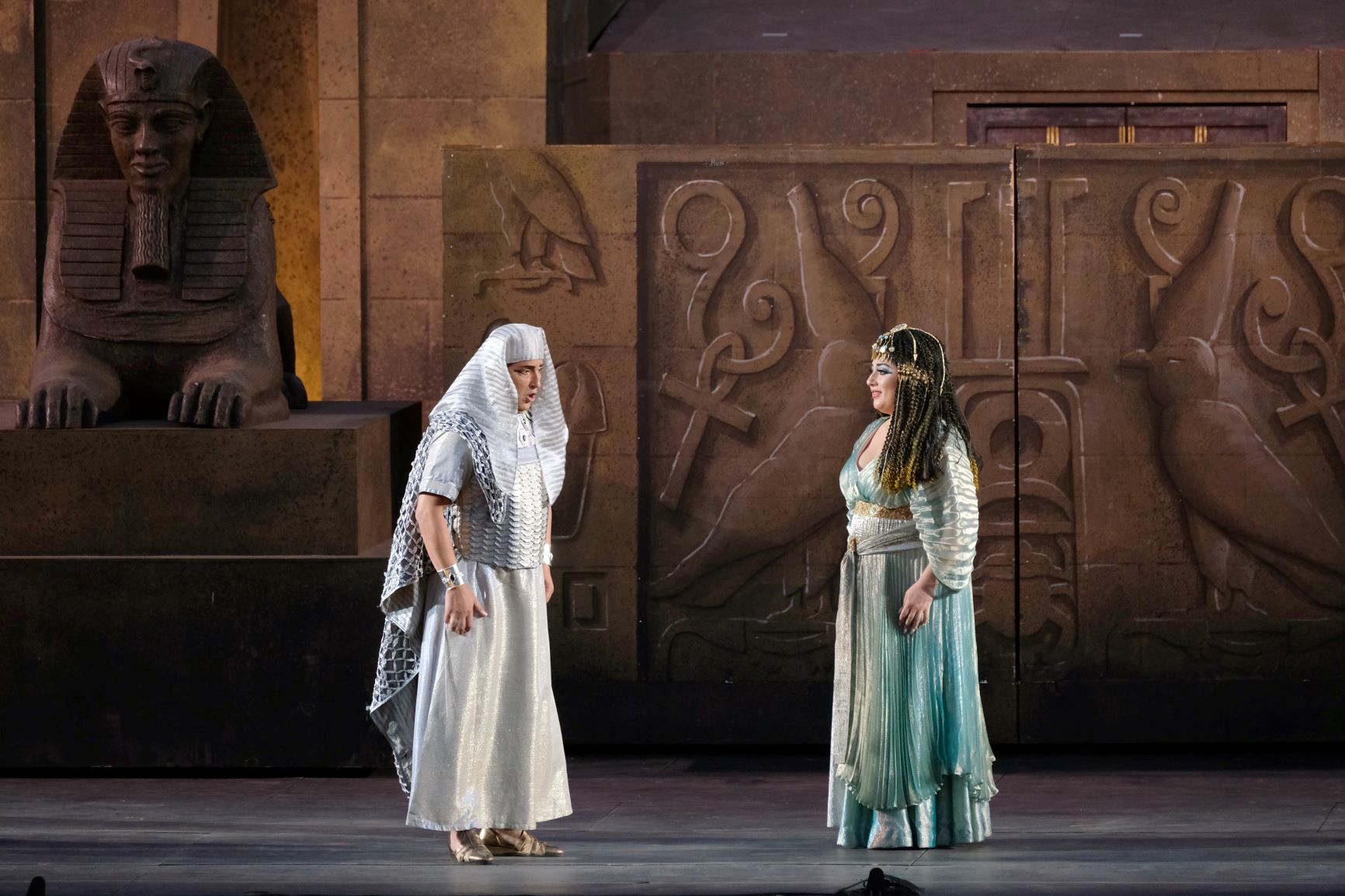 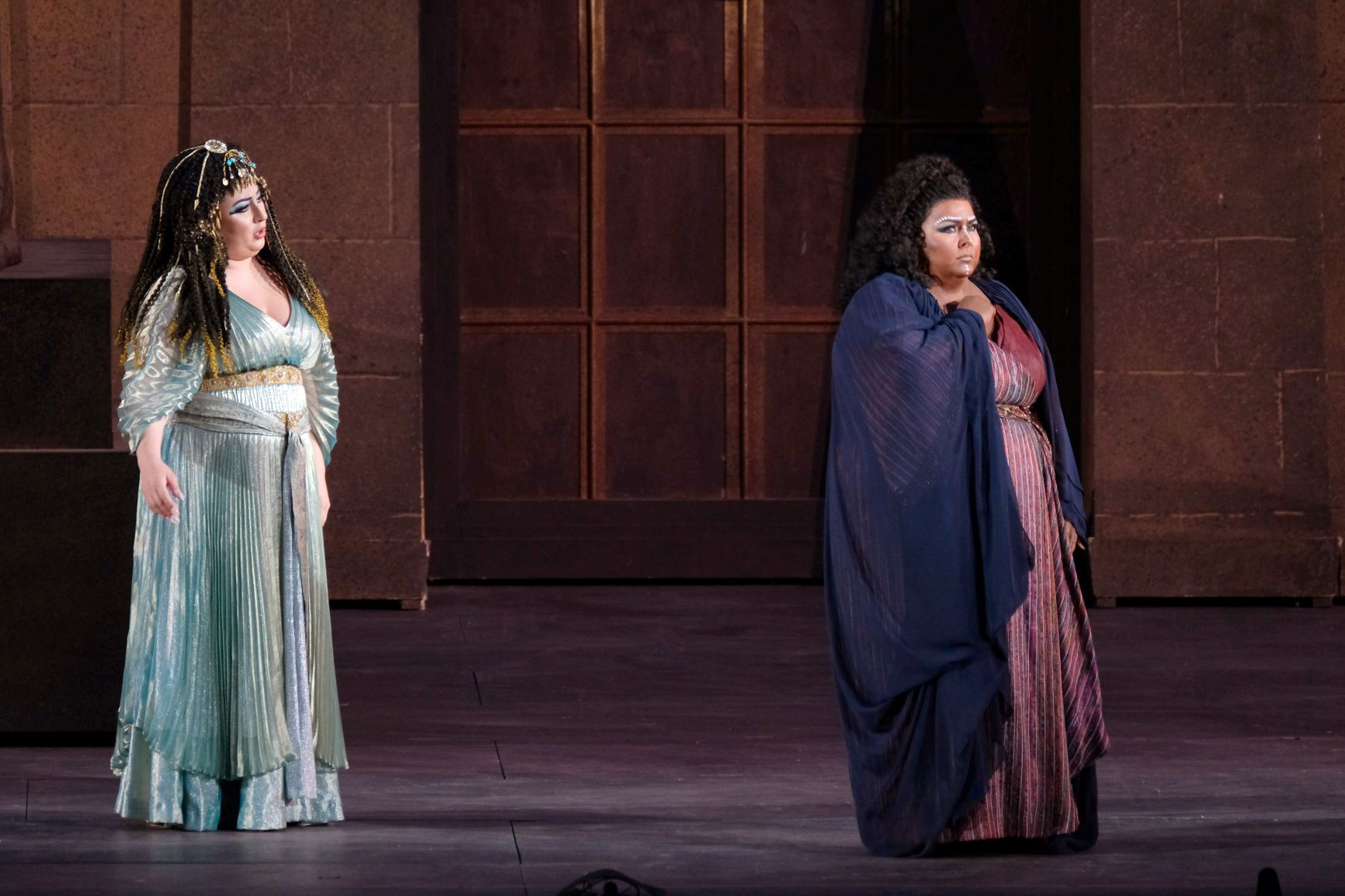 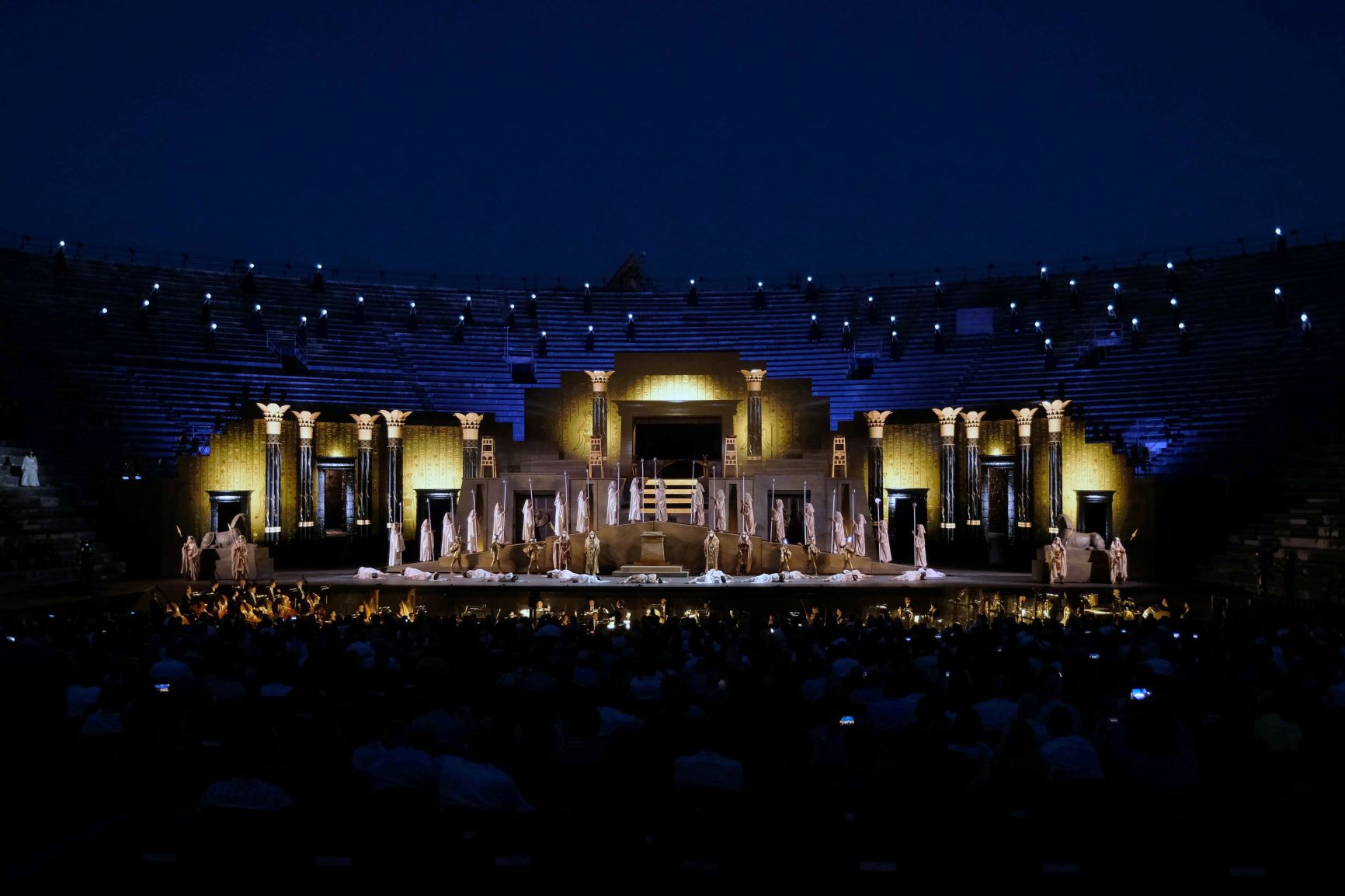 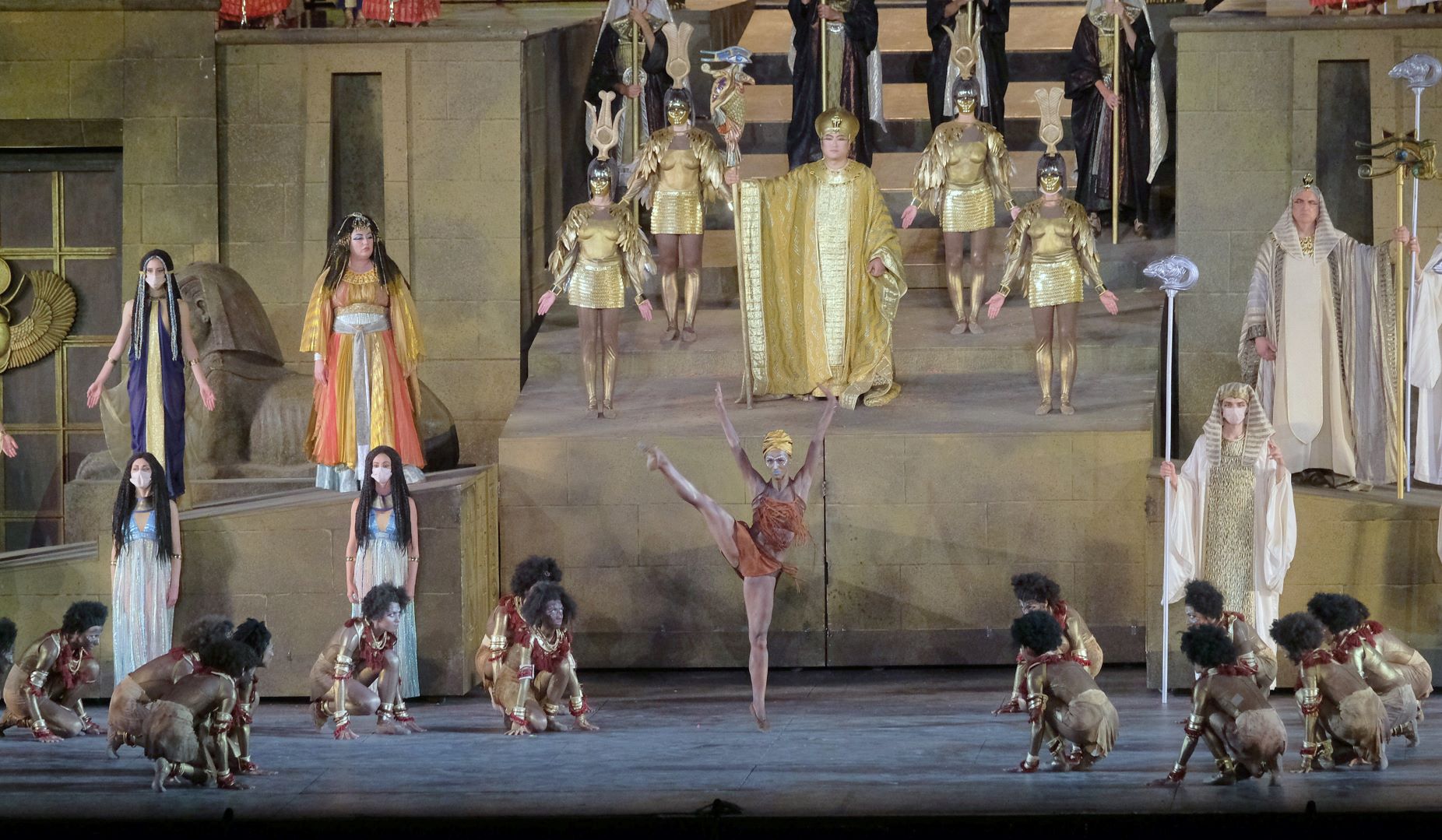 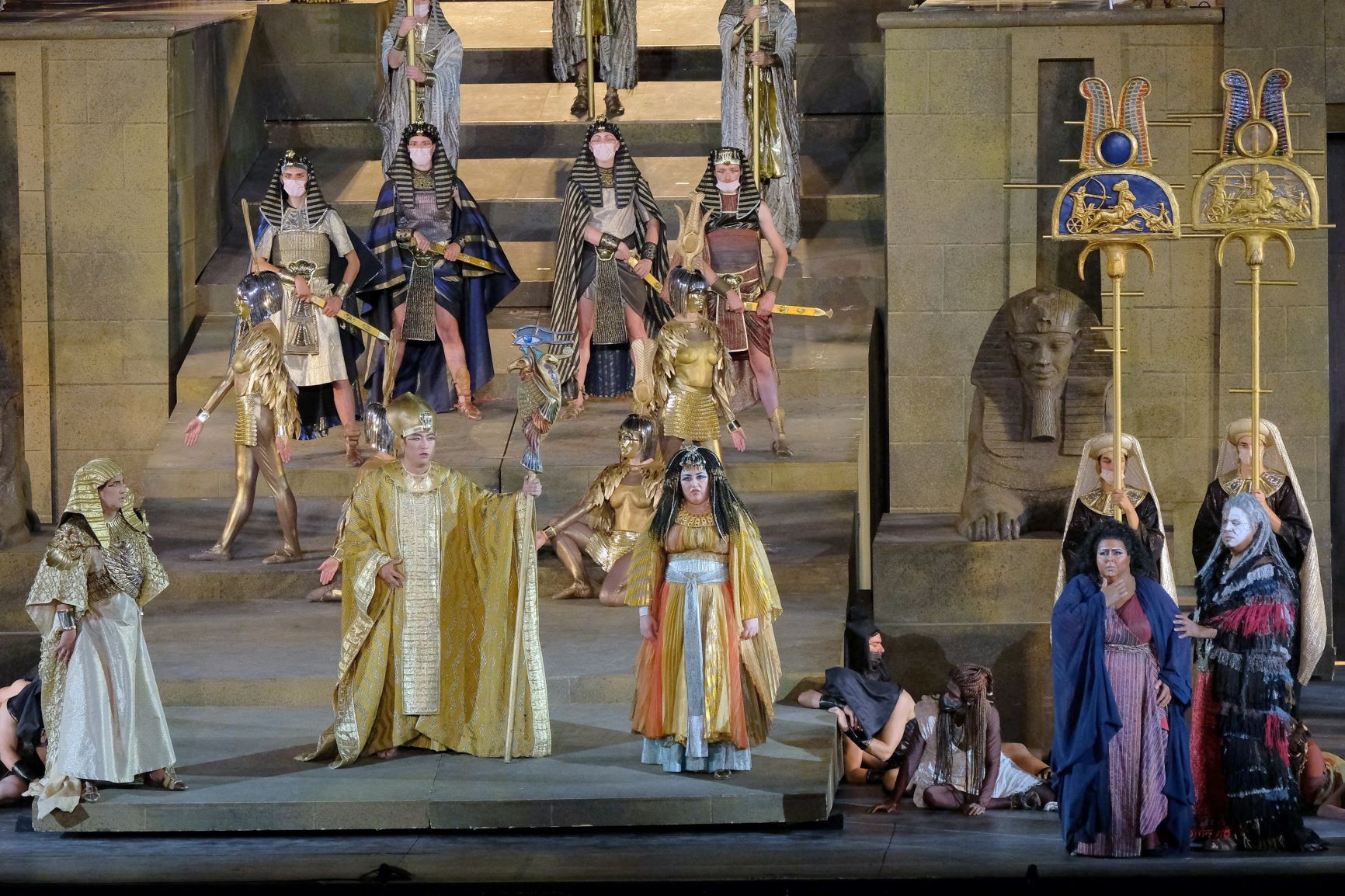 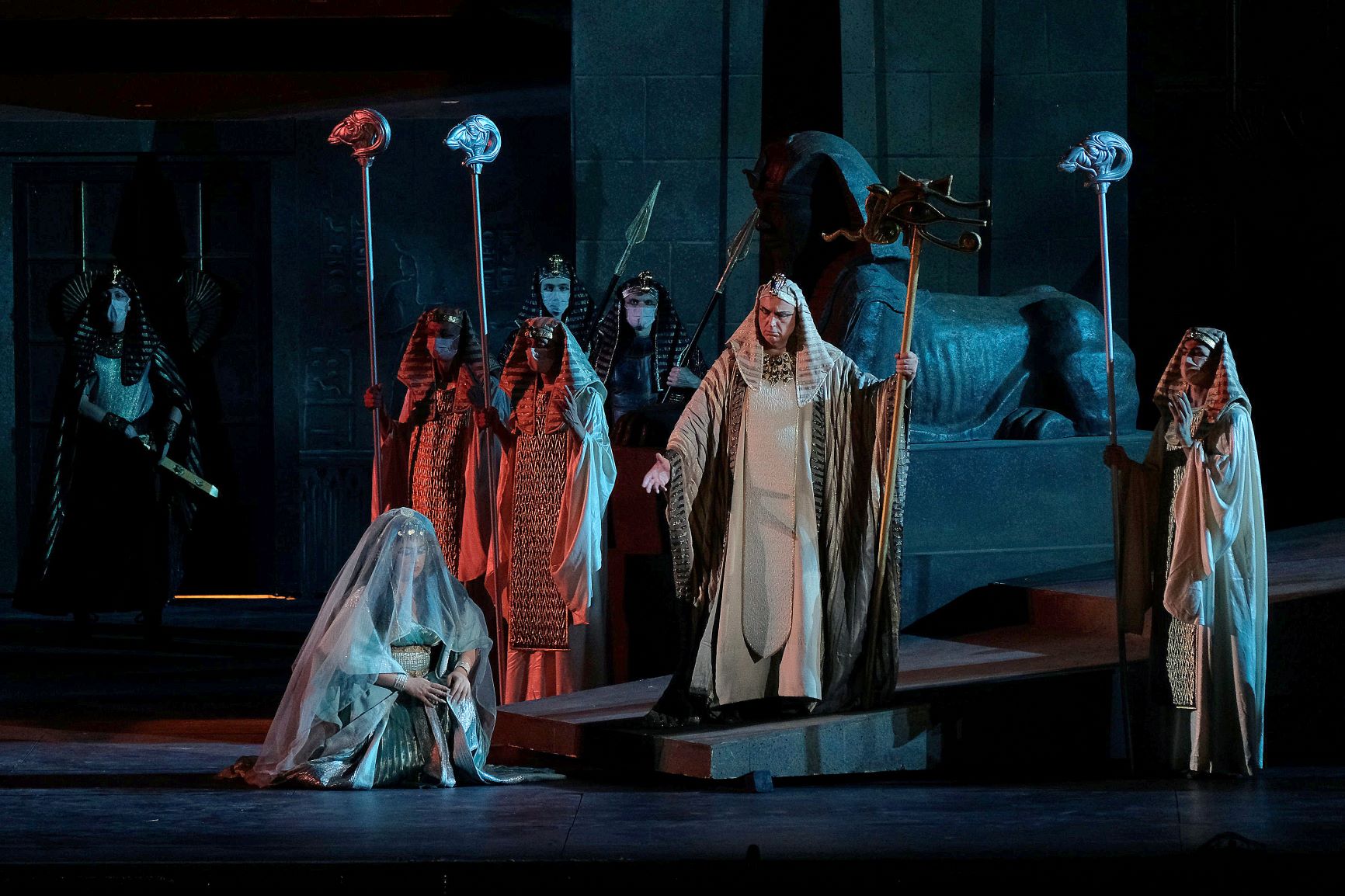 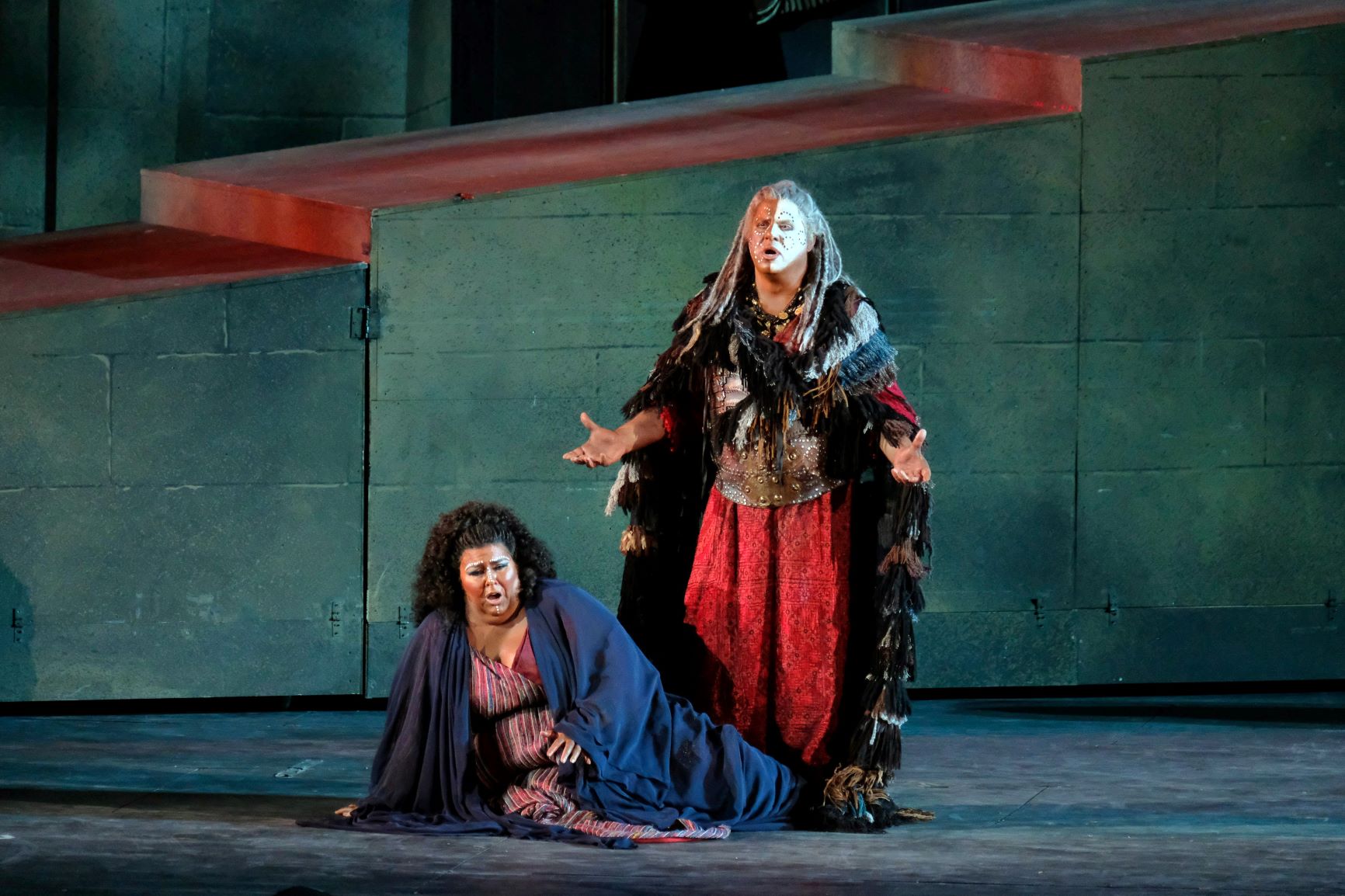 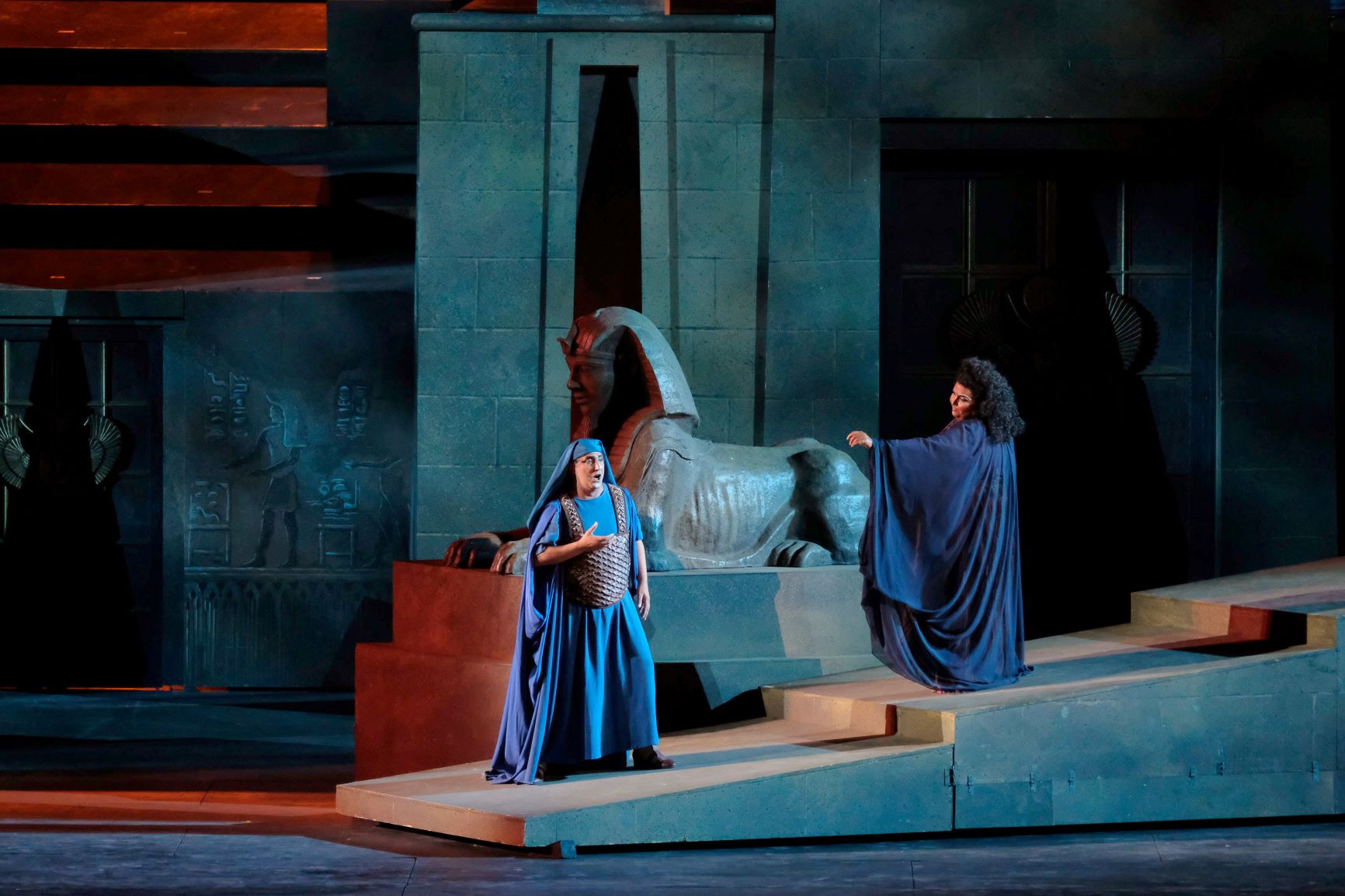 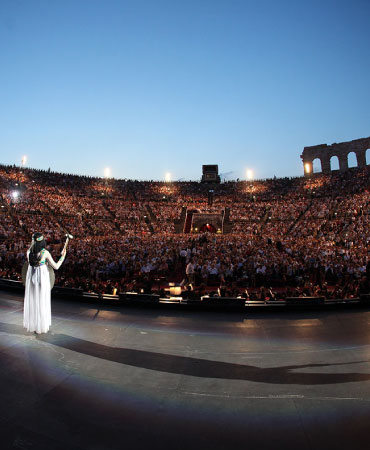 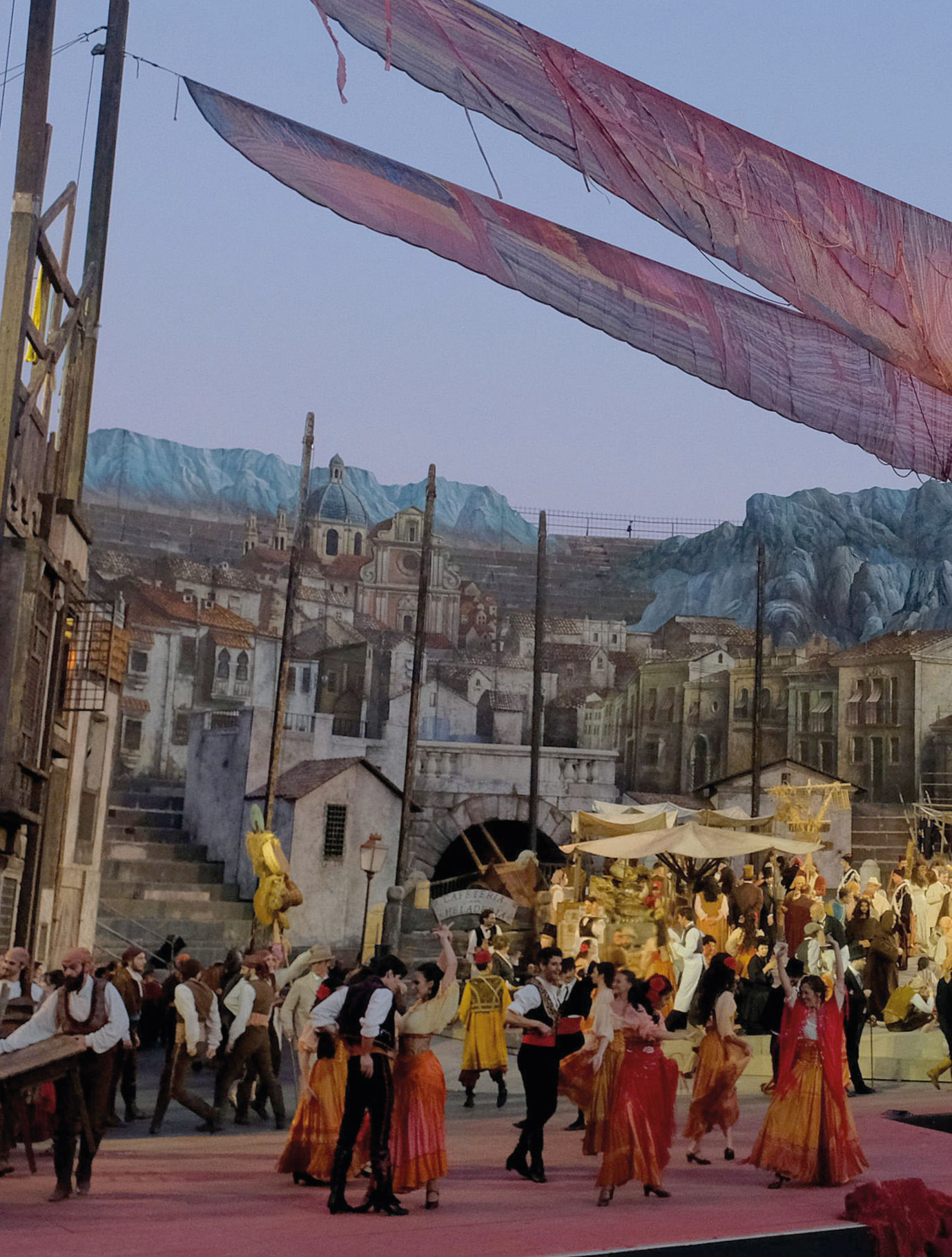 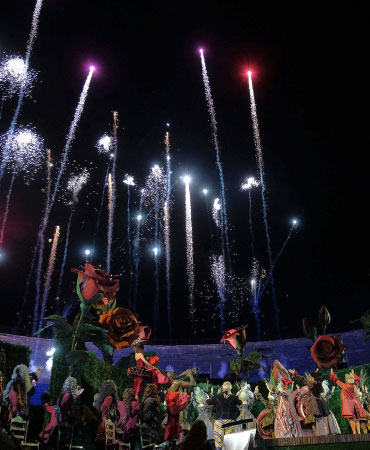 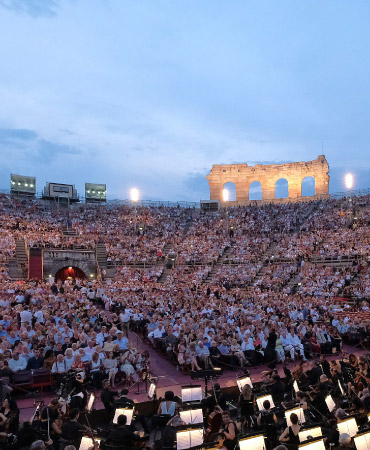 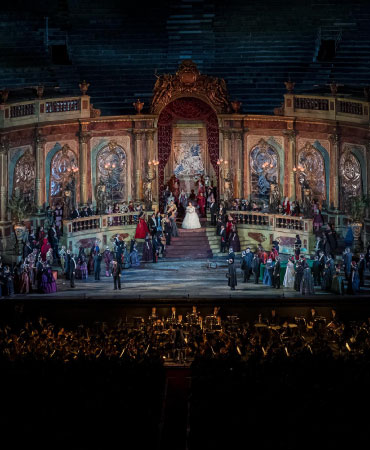 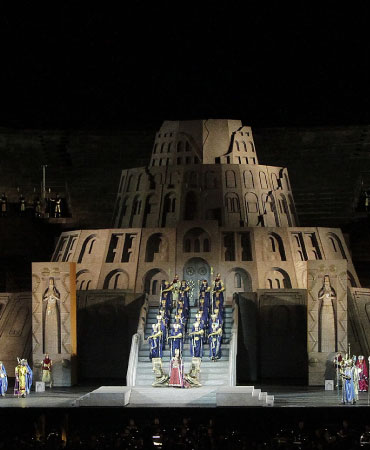 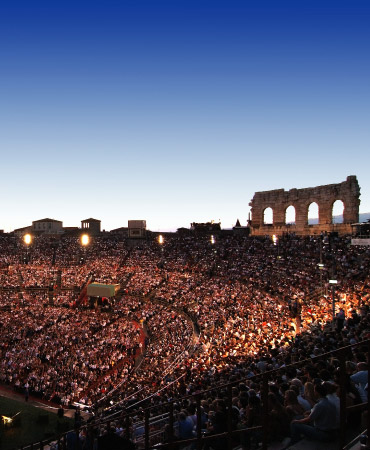 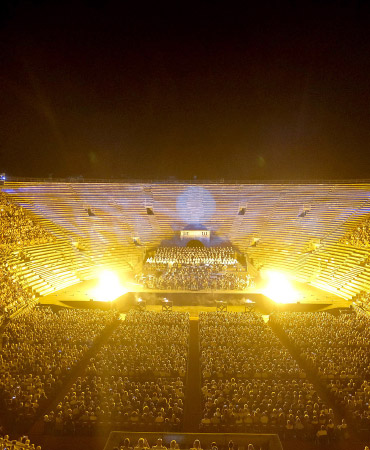 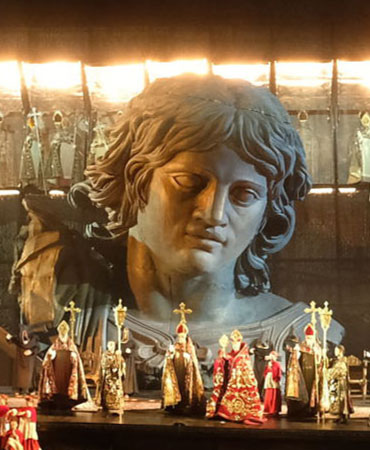 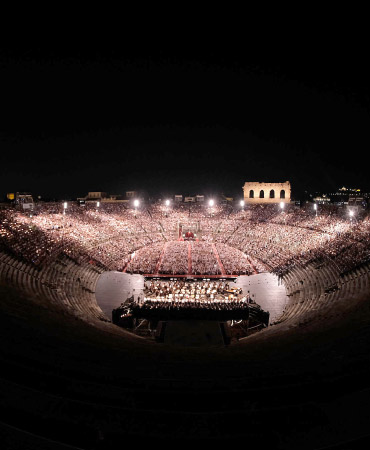 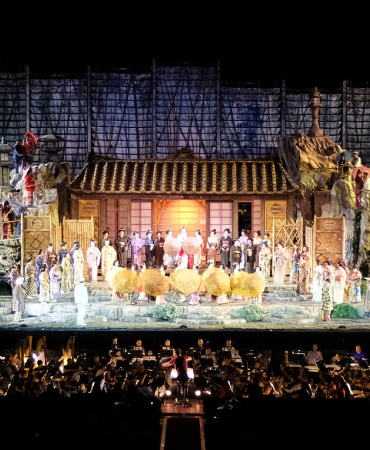 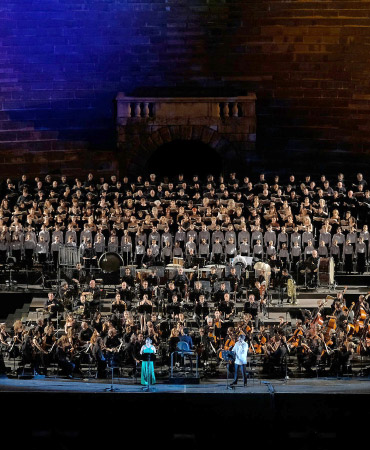 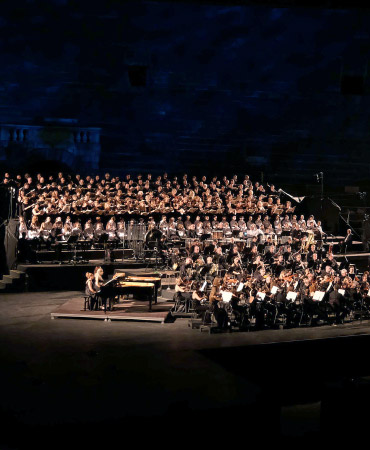