A tobacco factory and the barracks of the dragoons open out onto the main square of Seville. People are coming and going. A young girl makes her way through the crowd. She has an air of bewilderment and approaches the guards shyly, saying she is looking for Brigadier Don José. They tell her he will soon be here  and invite her to wait with them. Intimidated, she declines and wanders away.

It is time for the changing of the guard. A new platoon arrives, followed by a group of young rogues who mimic the march of the soldiers. Don José is with them. His fellow soldiers tell him of the girl’s visit and, from their description, he deduces it was Micaela, an orphan who his mother has welcomed into their home.

A bell rings and everyone’s eyes turn to the cigarette-makers as they walk out of the tobacco factory. The men rush to the entrance to admire them close-up. The girls enjoy flirting. Among them is Carmen, a beautiful and sensual gypsy. Well-aware of her charm, she sings a song which is full of allusions and from which it is clear that she does not believe in the constancy of love. Don José pays no attention to her. Carmen notes his indifference and so she provocatively throws him a flower, much to the delight of the crowd. Shocked by such brazenness, but also disturbed by it, he picks up the flower and instinctively hides it under his coat.

Micaela returns. She hands Don José a letter with money enclosed and a kiss to give him, a kiss from his mother. He is moved and when she leaves, he opens the letter. His mother, he reads, wants to see him married, to that fine girl. He swears he will follow his mother’s advice and is about to throw away the flower  when a fight breaks out among the cigarette-makers. Carmen has wounded a fellow worker with a knife. Don José is ordered to arrest her and escort her to prison. But on the way, Carmen, a consummate seducer, starts tricking him. She promises a meeting at the tavern of Lillas Pastia, near the walls of the city. By now bewitched, Don José succumbs: he frees her wrists, pretends to be pushed and falls to the ground. Carmen laughs and escapes.

In the tavern of Lillas Pastia, an infamous place and a smugglers’ inn where soldiers and gypsies meet. Carmen sings and dances a hypnotic and exotic love song in the company of her friends, Mercedes and Frasquita. Lieutenant Zuniga informs her that Don José, having spent time in prison for helping her to escape, has just been released. However, Zuniga, too is captivated by the gypsy and starts flirting with her, but is interrupted by the arrival of Escamillo. All the people present acclaim the young toreador as he recounts his prowess in the bullfighting arena, and he, too is struck by Carmen’s beauty.

When the regulars leave, the innkeeper allows Dancairo and Remendado to come in. They are two smugglers who are preparing to strike that night and want Carmen and her friends to help. This time, however, the gypsy has no intention of going with them: she is waiting for her man to return. Shortly afterwards, Don José arrives, manifesting all his love. Carmen starts dancing sensually for him but the moment the trumpet sounds the retreat, José (who has now been demoted to the rank of simple soldier) starts to head back to the barracks. This infuriates Carmen. She derides and insults him for this is not her idea of love. Just before leaving, he pauses and pours out his heart to her. Despite their differences, he says, he loves her and cannot live without her. Carmen then invites him to join the smugglers. She proposes a life free of constraints, but José rules out the idea of deserting. Faced with the umpteenth misunderstanding between them, he decides to leave her. In the meantime, Zuniga arrives, returning in the hope of seducing Carmen. As soon as he sees Don José, he orders him to return to the barracks, but Don José refuses and a violent fight breaks out. At this point, José, guilty of insubordination, has no choice but to join the smugglers and take up the life of an outlaw.

Having arrived at their hideout in the mountains, the smugglers sit and rest. Carmen and Don José exchange a few words but it is clear that their relationship is deteriorating. She is already tired of him and wants to be free; he is full of remorse over having betrayed his mother. Above all, though, he is obsessed by jealousy. Frasquita and Mercedes read tarot cards and see a bright future ahead for them. Carmen then comes over and consults the cards. She looks and sees death, both for her and Don José. She is agitated for she knows that her man is exasperated and could even kill her, but she is not afraid. She resigns herself to her fate.

Micaela unexpectedly arrives, accompanied by a guide. These places scare her, but in a desperate attempt to redeem the man she loves, she summons up the courage to go on. From afar, she sees Don José standing on a rock with a rifle, firing a warning shot at a stranger. Scared stiff, she quickly hides. Then Escamillo appears, having narrowly escaped Don José’s rifle shot. The toreador has come to track down the gypsy he is in love with. He and Don José exchange a few words and quickly realize they are rivals in love and prepare to fight a duel to have her. They unsheathe their swords and are about to rush at each other when Carmen and the smugglers appear and stop them.

Escamillo departs, but not before inviting them all to the bullfight in Seville. The band of smugglers is about to depart once more when they find Micaela. She pleads with José to go back home with him, but he refuses. (He knows Carmen would take advantage of his absence to start a relationship with the toreador.) However, when he learns that his mother is dying, overcome with a sense of guilt, he gives in and goes with her. But before leaving, he warns Carmen that they will meet again, soon.

In the square opposite the arena in Seville, the crowd is excitedly waiting for the toreador to arrive. When the team of toreadors arrive, preceded by the band, the crowd becomes euphoric. Escamillo arrives accompanied by Carmen, elegant and more radiant than ever. Before he enters the arena, she swears that she has never loved anyone as much as him. Don José is also in the crowd and Frasquita who has seen him, warns Carmen to be careful: it would be better if she went, she says. Carmen is not intimidated, however, and replies defiantly that she is not afraid of him; on the contrary, she wants to meet him.

Everyone goes into the arena, except Carmen. Don José arrives. He is deranged. He begs her to return to him. He humiliates himself by saying that he is ready to do anything in order to have her again. Carmen, though, is not moved by pity. She remains inflexible and haughty. She says she no longer loves him and will not change her mind. After all, free she was born and free she will die. The atmosphere becomes more and more tense and the words increasingly violent until, as a final provocation, she pulls off the ring he had given her, and throws it away.

While the crowd inside the arena is cheering and applauding Escamillo’s victory, Don José, by now out of his mind with anger and frustration, stabs Carmen mortally. Before the crowd who are now coming out of the arena, he throws himself on top of her lifeless body, calling

The historic production of Carmen which, in 1995, was the occasion of the Arena debut of Franco Zeffirelli, is returning “Près des remparts de Séville” and to the heart of Verona. Georges Bizet’s masterpiece will officially inaugurate the 99th Opera Festival on 17th June 2022 and will be performed on a total of 9 evenings until the end of August. In the setting of a breathtaking Seville, be enchanted by the timeless fascination of Carmen, the rebellious gypsy who warns her suitors with these words: “Si tu ne m’aimes pas, je t’aime/Si je t’aime, prends garde à toi!” (If you don’t love me, I love you/If I love you, you’d better watch out!) 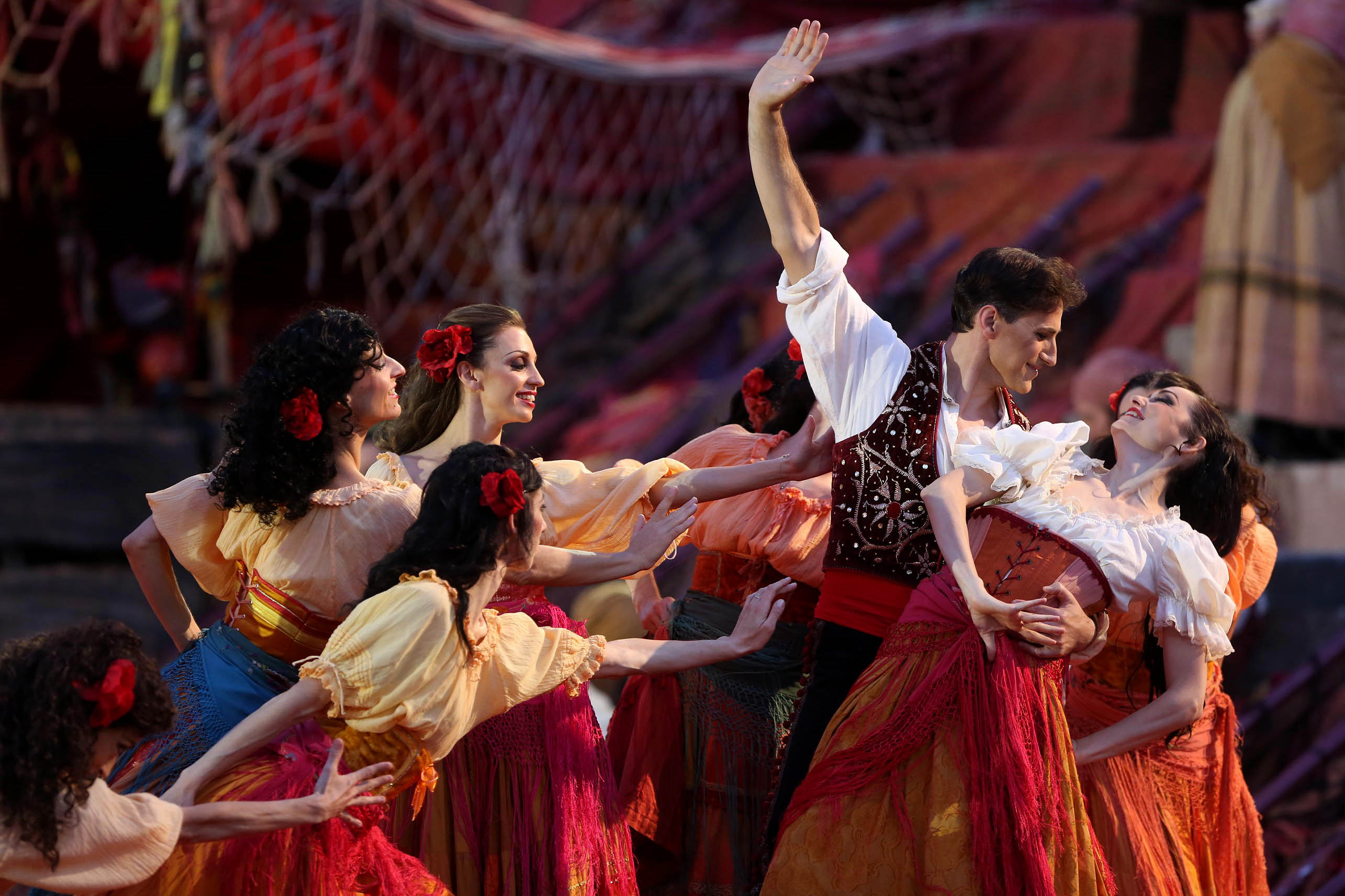 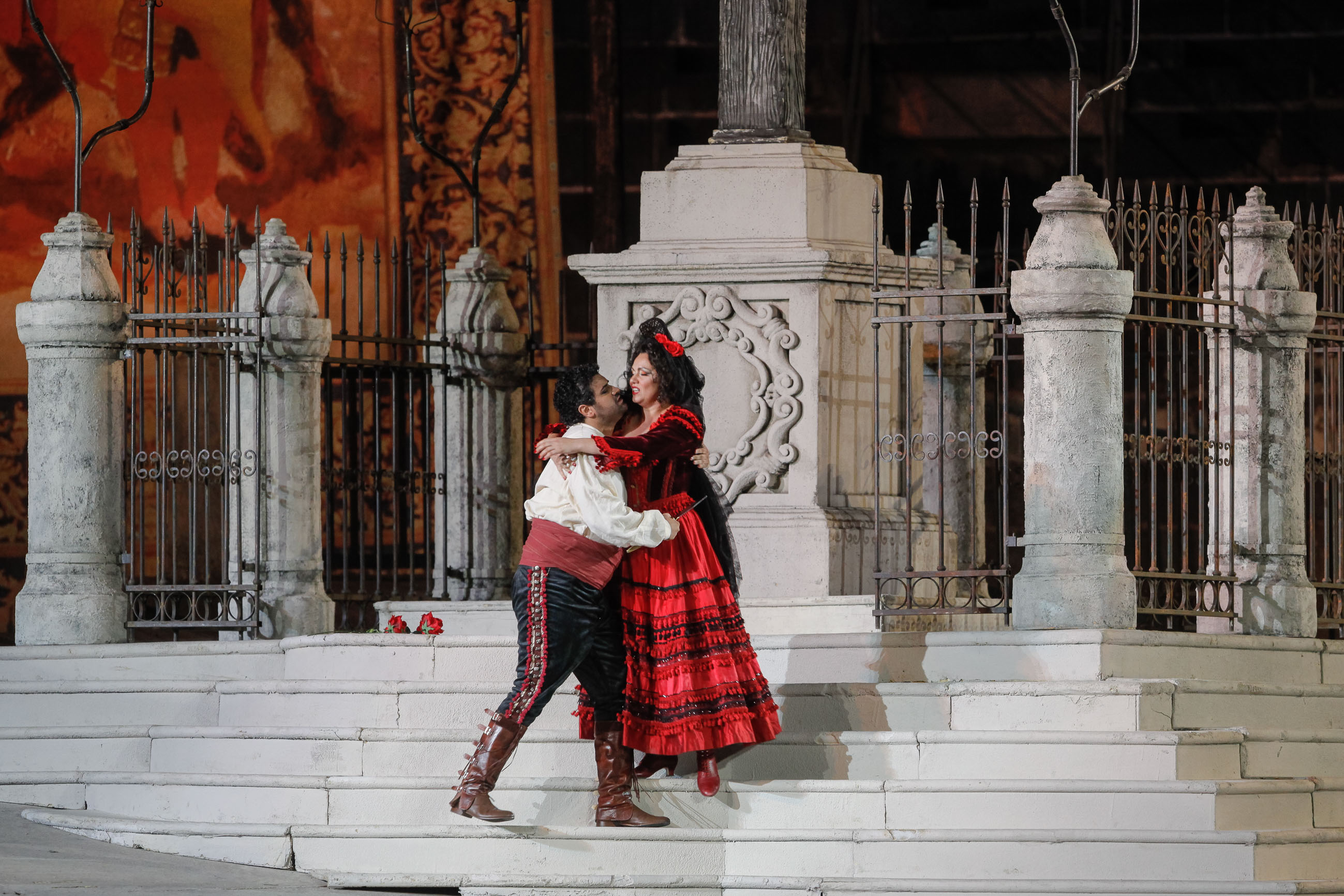 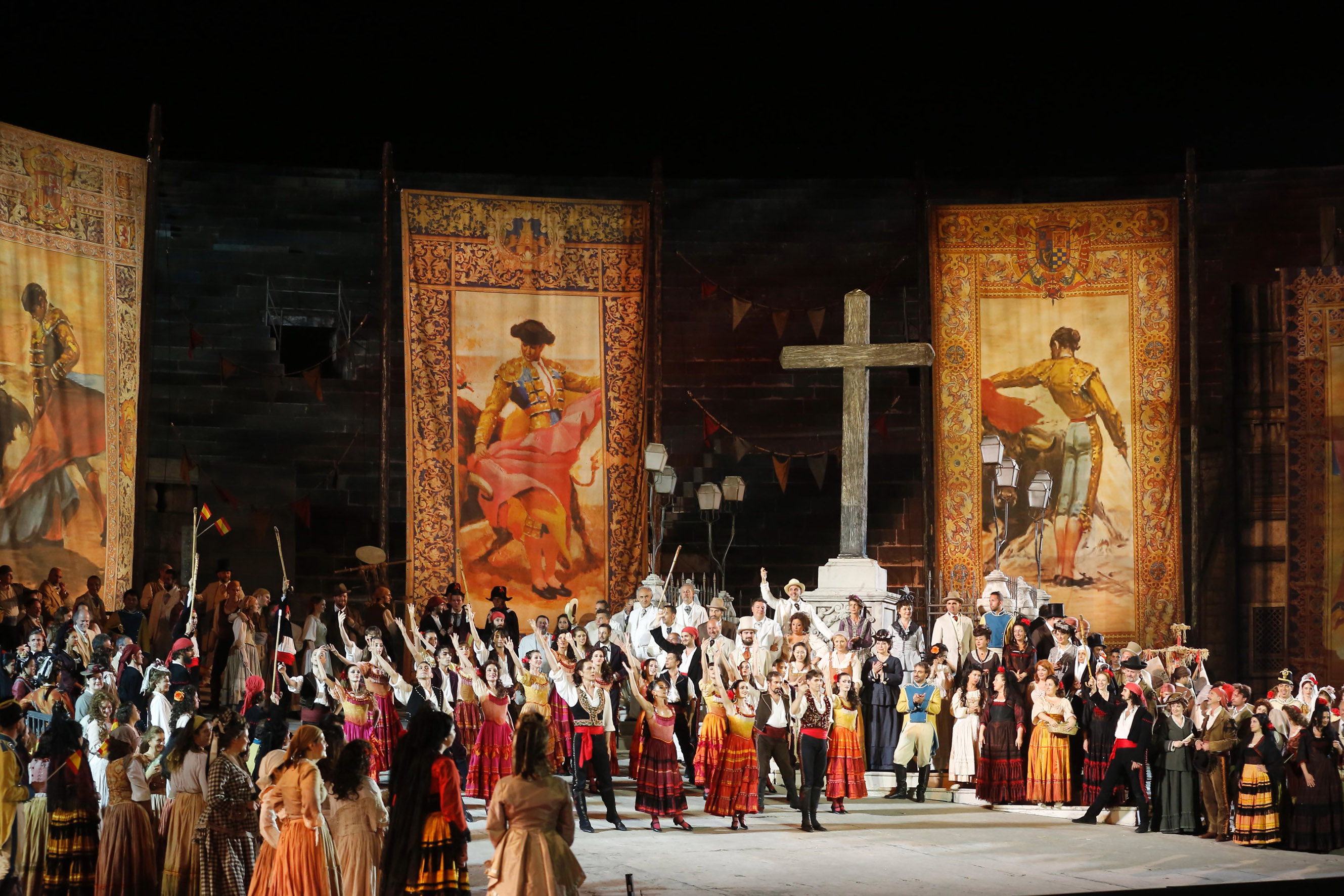 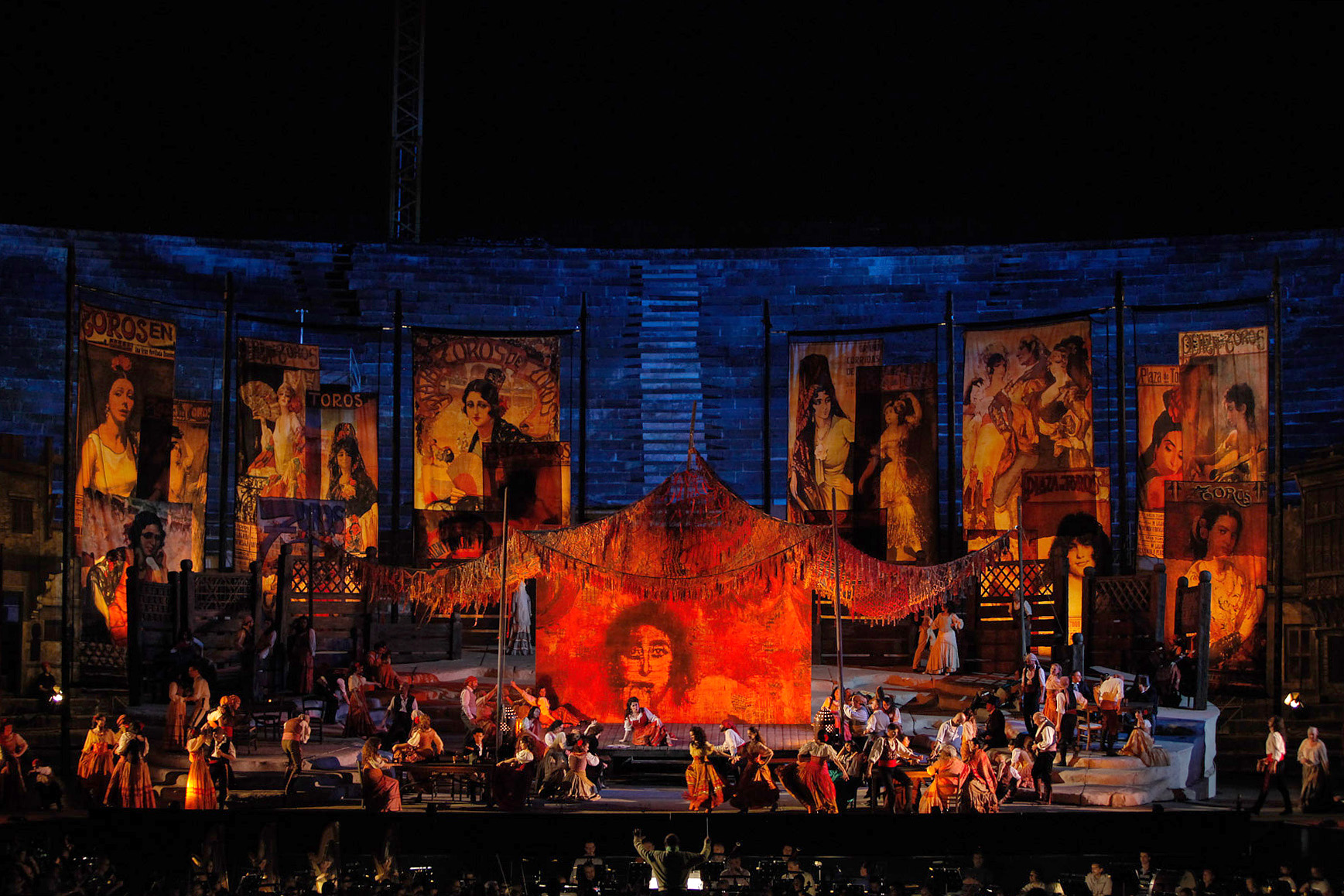 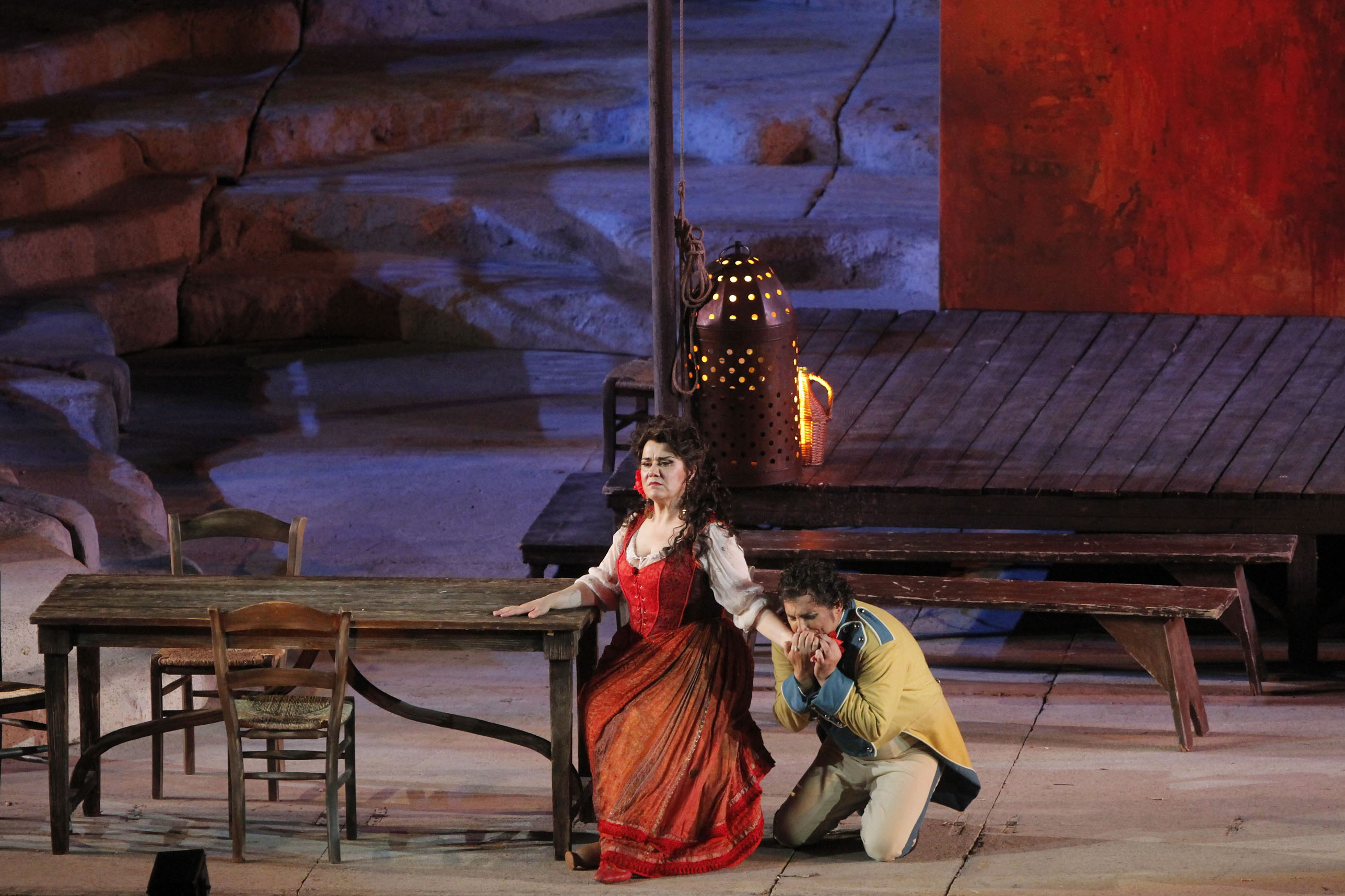 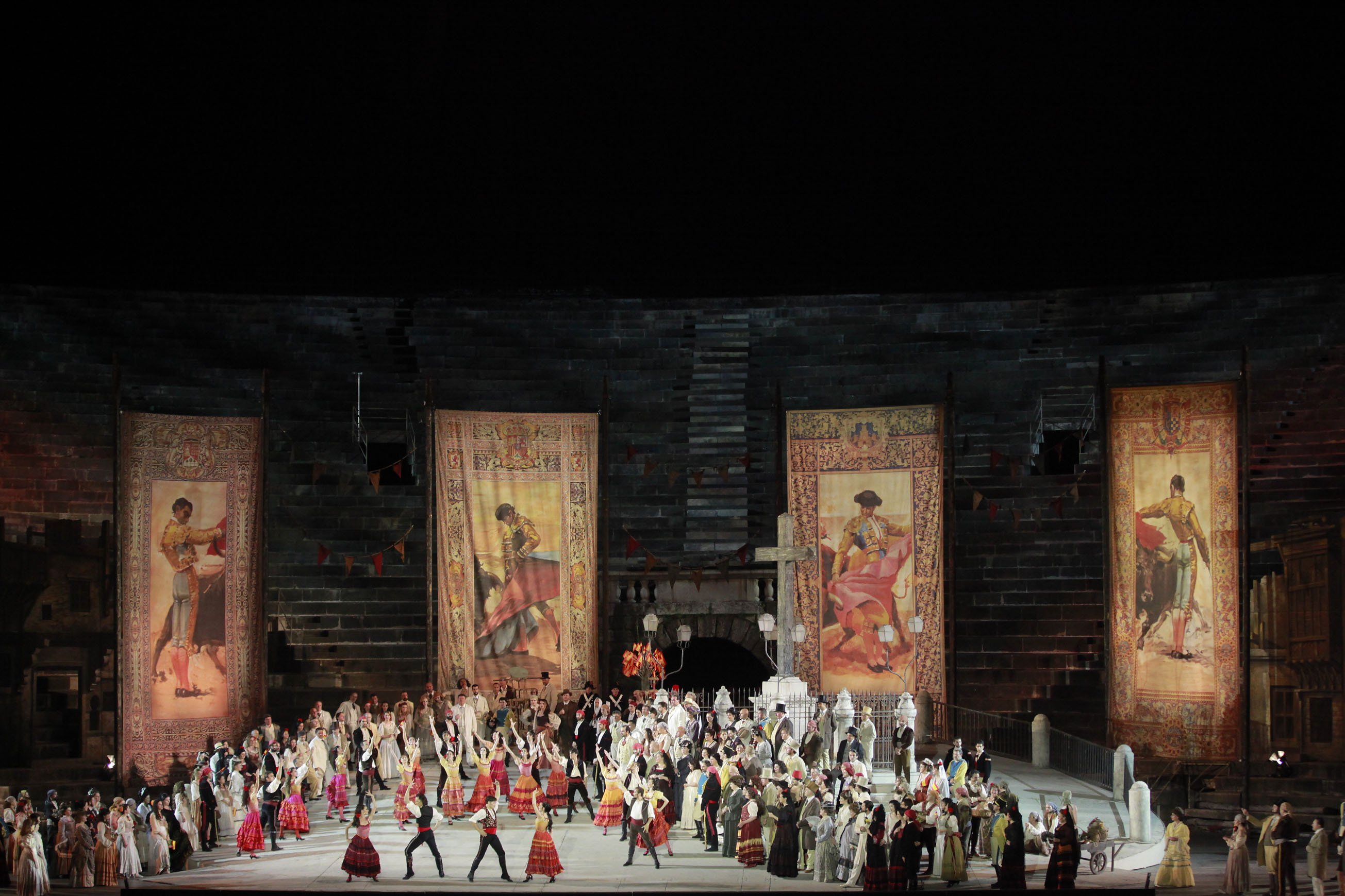