Melodrama in 3 acts by Giuseppe Verdi

Melodrama in 3 acts by Giuseppe Verdi.

Violetta Valéry is giving a reception at her luxurious flat in Paris. She is a high-class kept woman,

protected by Baron Duphol. Not only is she beautiful, but her sensitivity and fragility add to her charm. In the midst of the dancing, she is presented to an admirer, Alfred Germont a young man of excellent family. He dedicates a toast to her and invites her to dance but Violetta is suddenly taken ill and cannot even reach the ballroom. She is already in the early stages of consumption and, apart from her illness, she is also suffering from moral unease, a feeling inside which distances her from the superficiality of the party. Alfred senses her mood. He confesses that he has loved her for a year, secretly. Violetta is touched by this, but warns him against loving her in any other way than as a friend. First, she rejects him, then she gives him a flower, inviting him to re-present himself the following day.

Once alone, Violetta reflects on her feelings. She is perturbed: a real love responsibly accepted could change her life. Then she rebels: the idea of change is sheer madness. She cannot give up her unscrupulous independence. Yet, her anxiety for freedom, counterbalanced by Alfred’s loving attention, tempts her to free herself from a knot which is forcing her to lie to herself.

Six months later, Violetta and Alfred are living together in a house in the country outside Paris. One day, Annina, a servant, tells Alfred that Violetta has sold all her possessions to finance their new life. His pride hurt, he leaves for Paris in search of more money.

No sooner has he left than George Germont, Alfred’s father, arrives. He begs Violetta, to give up his son, speaking insolently, accusing her of ruining him. She defends herself well, showing him the receipts of sales of her possessions, adding that she has never asked Alfred for money. The man instantly changes tone. However, he pleads with her to leave Alfred because the engagement of his daughter risks being compromised by the scandal of this relationship, unacceptable in the bourgeois mentality. The verbal abuse becomes more subtle. Germont senses that Violetta feels a sense of guilt and takes advantage of her weakness. He knows which points to touch, he knows what to say and how to say it. And he keeps on going: not having contracted marriage, her prospects in old age are uncertain, he says. Violetta admits her error. She has asked forgiveness, it’s true; maybe God will forgive her, but man certainly won’t. At the end, she decides to sacrifice her personal happiness in order to restore happiness to Alfred’s family. She has only one request: that when she is dead, Alfred know of her sacrifice. Geront is profoundly moved by this and he promises to grant her wish.

Violetta writes Alfred a letter of farewell, telling him she no longer loves him. She is distraught, she

cries and before leaving, lets out a scream of love. Alfred suddenly returns so she rushes out of the room, pretending to go into the garden. He is informed of his father’s visit during his absence and this worries him. Shortly afterwards, he reads the letter and learns that his love is returning to her past life in Paris. He is filled with jealousy and bitterness. His father consoles him and takes advantage of the situation, convincing him to return home. Alfred is beside himself; maybe he

has a rival in love. He hastens to find Violetta to get revenge.

The same evening, Flora Bervoix has a party at her home. The din of the masked dances starkly contrasts with the protagonists’ feelings of solitude and anxiety. Alfred enters and immediately starts gambling, and winning. Violetta arrives, accompanied by Douphol. Alfred challenges the Baron at cards and repeatedly wins, at the same time provoking him by making allusions that hurt. Dinner is announced and everyone leaves the room.

Violetta comes back immediately. She has given Alfred a nod and he understands that she wants to

talk. He comes in and listens, but it seems that dialogue is impossible: they are unable to communicate. They have hit a wall and she is forced to lie so as not to reveal the truth. She says she loves Douphol. On hearing this, Alfred loses control: in a fury of rage, he calls all the guests into the room and throws all his winnings at Violetta’s feet, asking the company to witness that in so doing, he has paid back the money she spent on him. Everyone is astounded by his lack of social aplomb. Violetta faints and Alfred is upbraided by his father for his heartless conduct. Alfred, contrite, is escorted out by his father, but only after he has been challenged in a duel by Douphol.

A month later, Violetta is ill in bed. She has little time left to live, Dr. Grenville informs Annina. Violetta is extremely weak: all she can do is drink some water, give instructions that what little money she has left be given to the poor, reread her letters. There is one letter in particular, from George Germont, telling her of Alfred’s return. Having wounded the Baron in the duel, he fled abroad but is now returning to Paris to see her and to ask forgiveness, having learnt of the sacrifice she made for him. But it is too late. Violetta looks at herself in the mirror and sees what a ghost of her former self she is. All she can do is say goodbye to her past dreams of happiness. Outside it is Carnival and life goes on as normal.

Momentarily, a ray of hope returns. Alfred rushes in and the two lovers exchange words of love and forgiveness. He promises to take her away from Paris where they’ll be able to live happily together, but Violetta is already too ill. The arrival of George Germont , now ready to accept Violetta as a daughter, and Alfred’s promise never to leave her again are too much. Violetta makes one final gesture of love: she gives Alfred a portrait of herself when she was young and beautiful, saying that is how she wants him to remember her.

For a fleeting moment she shows signs of recovery, only to fall back and expire. 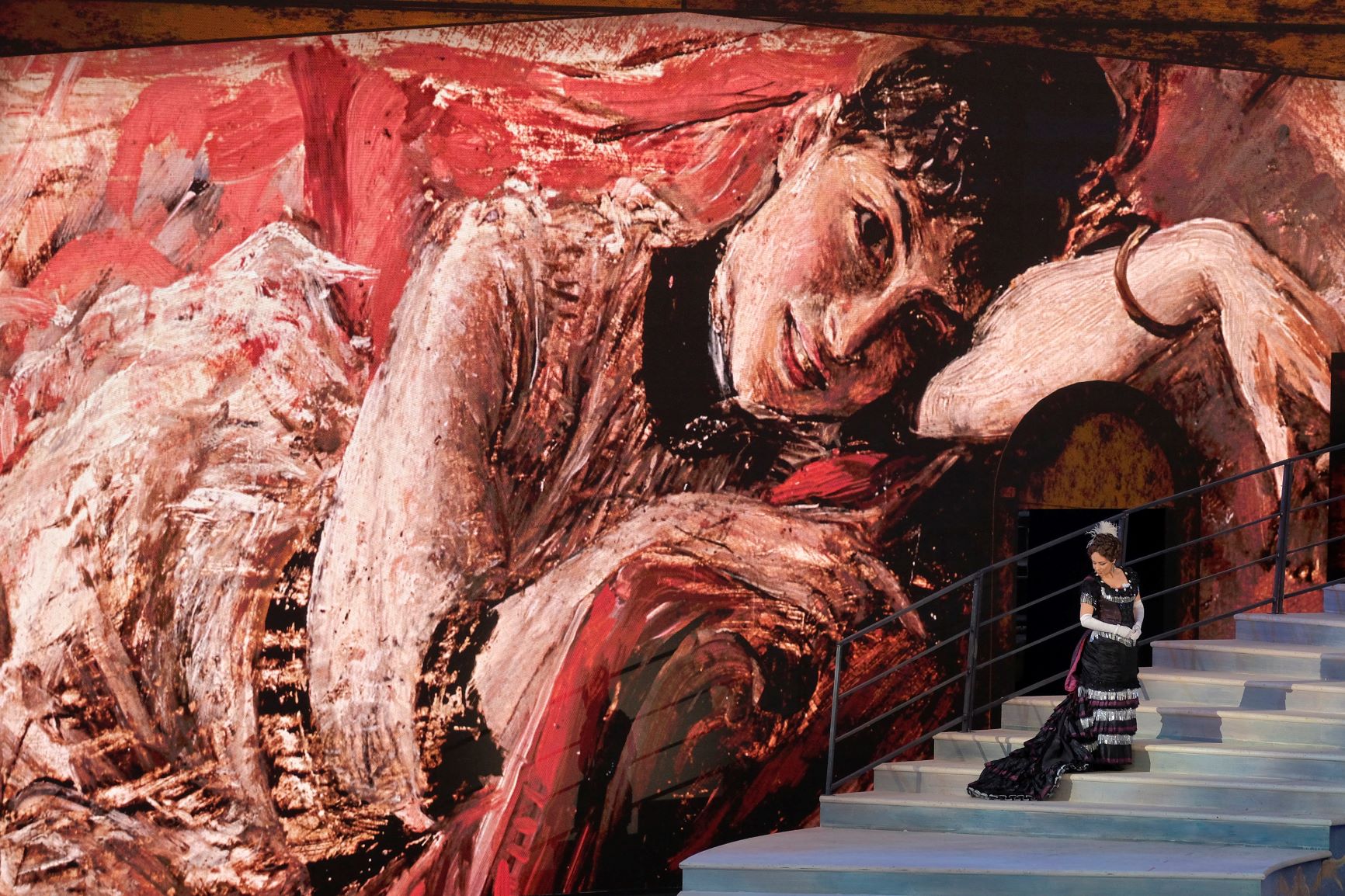 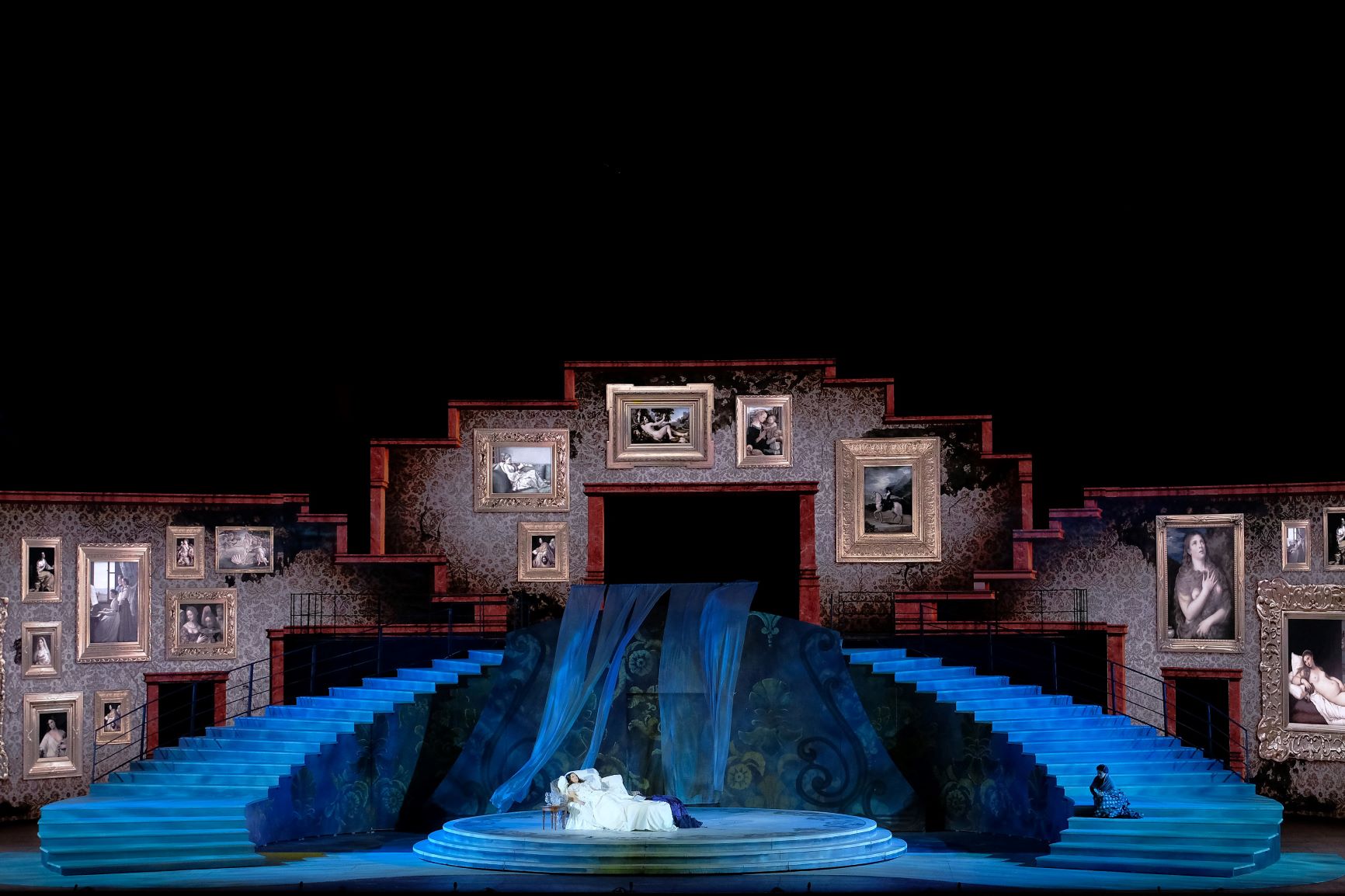 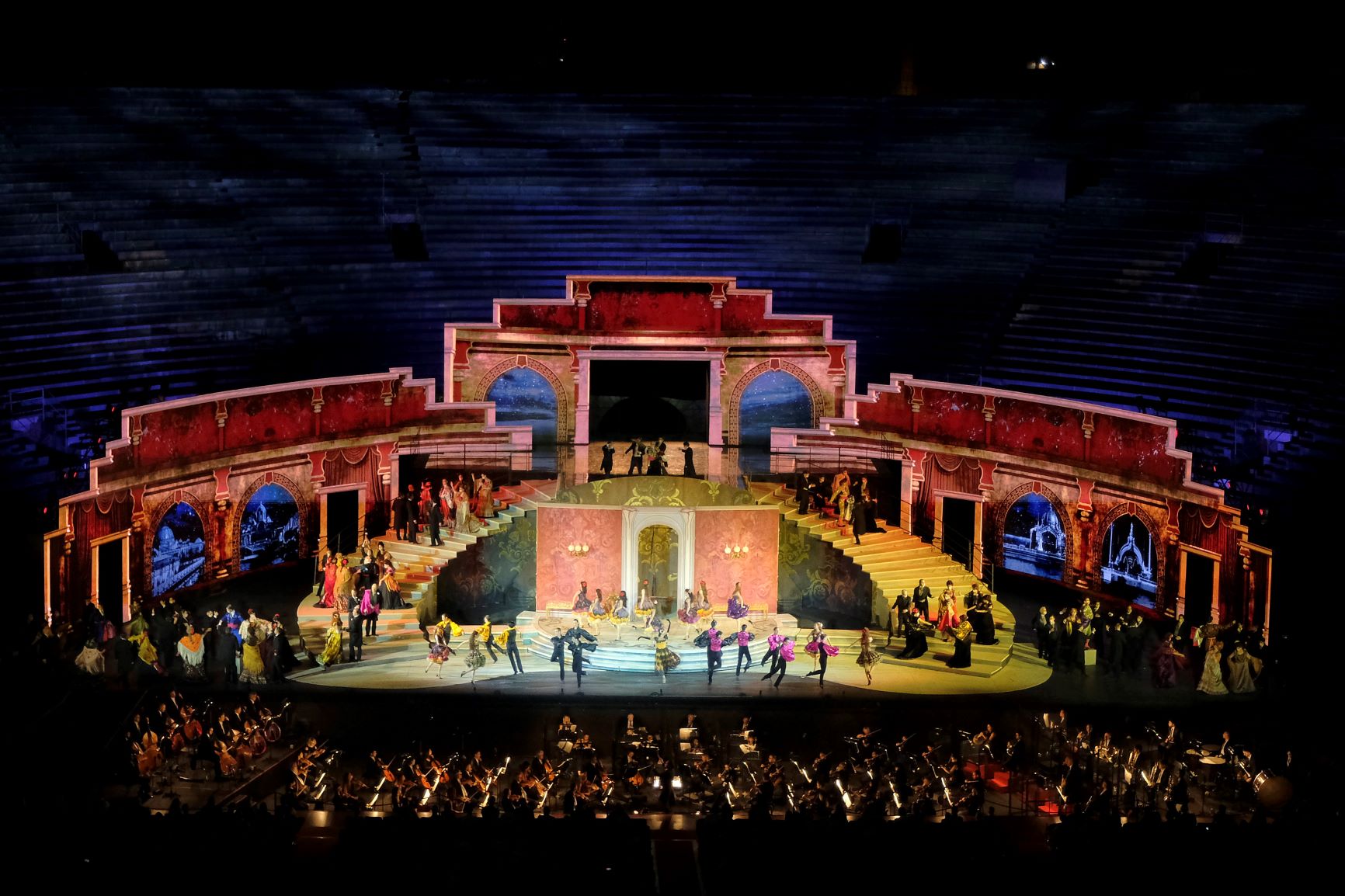 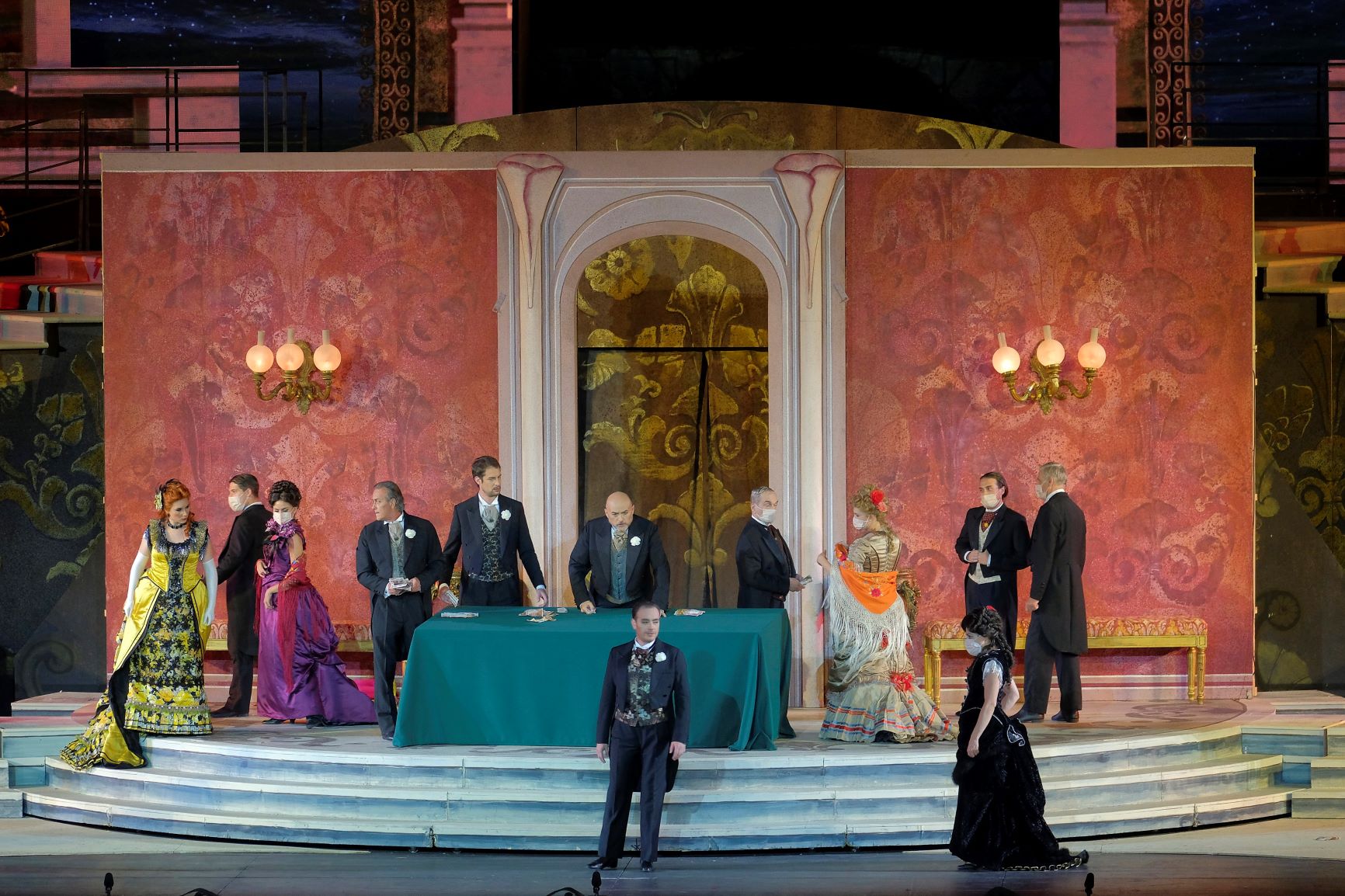 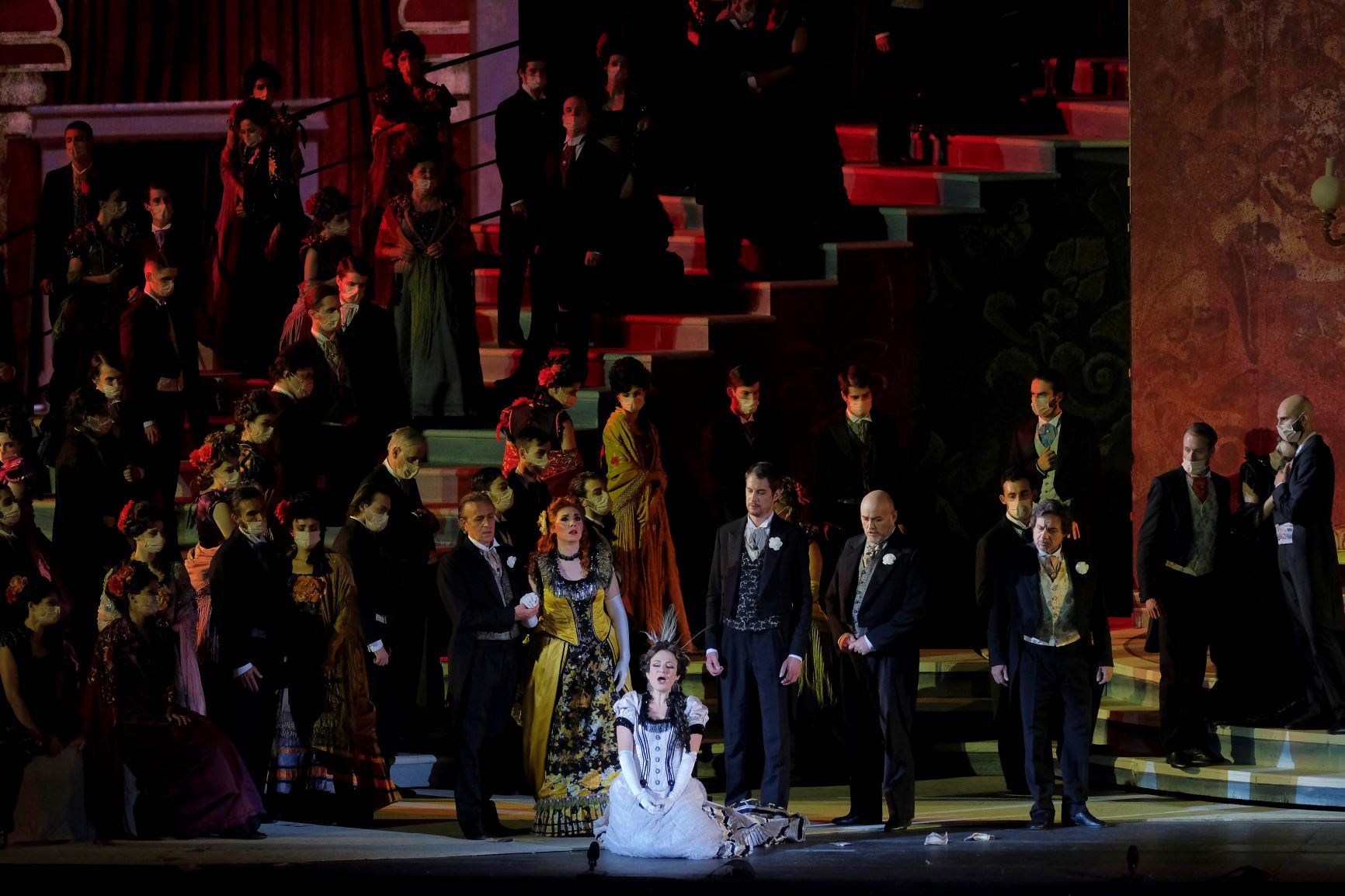 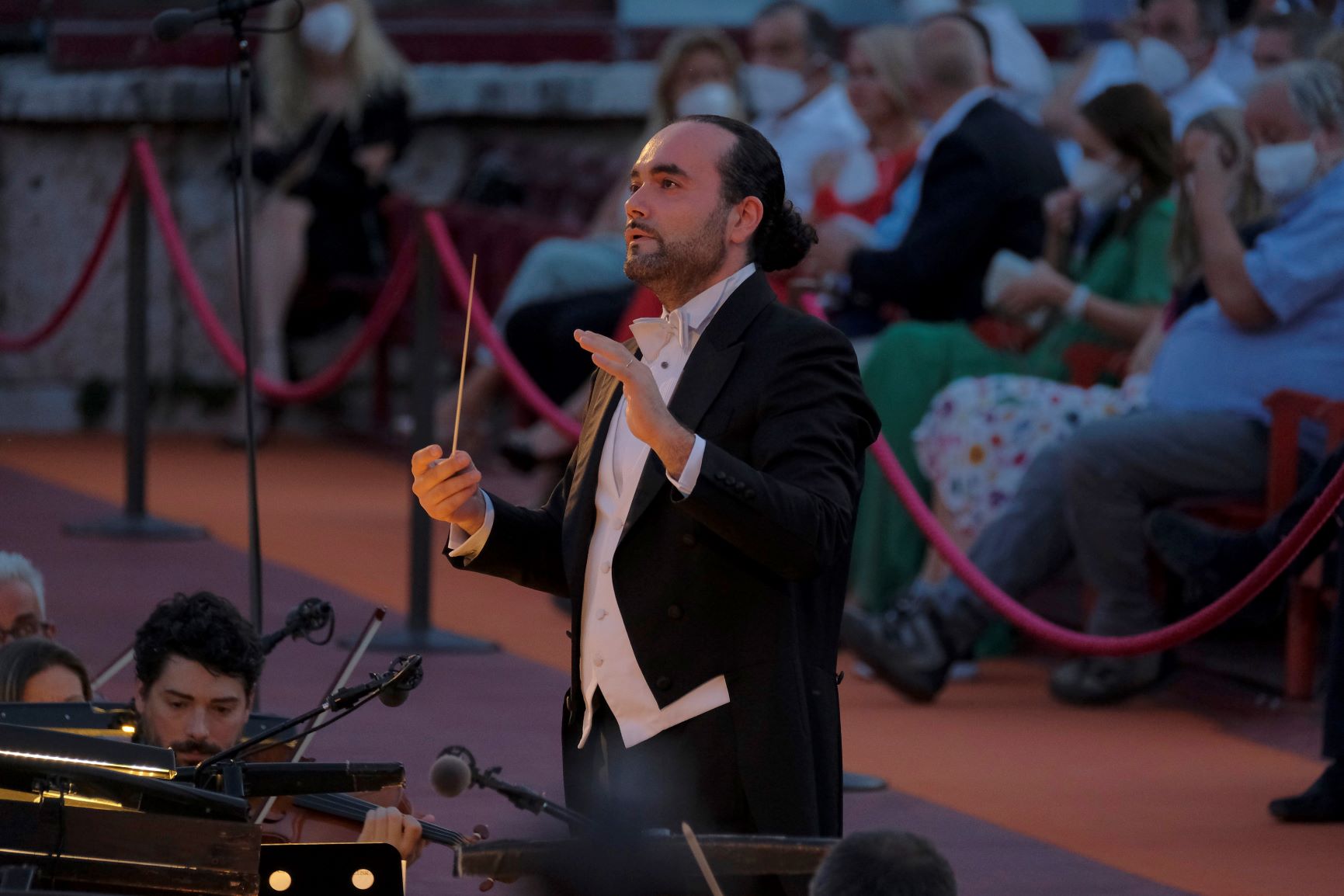 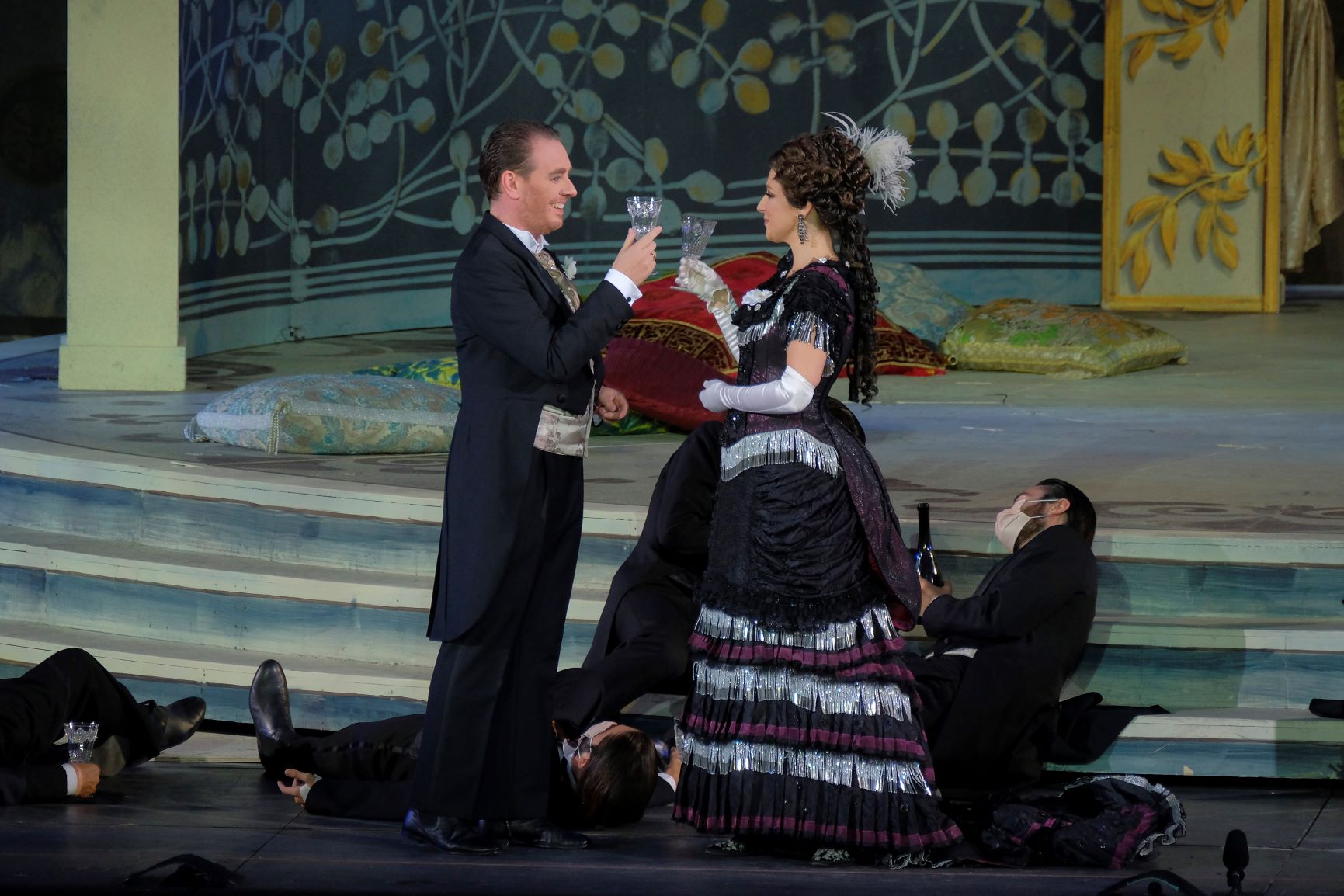 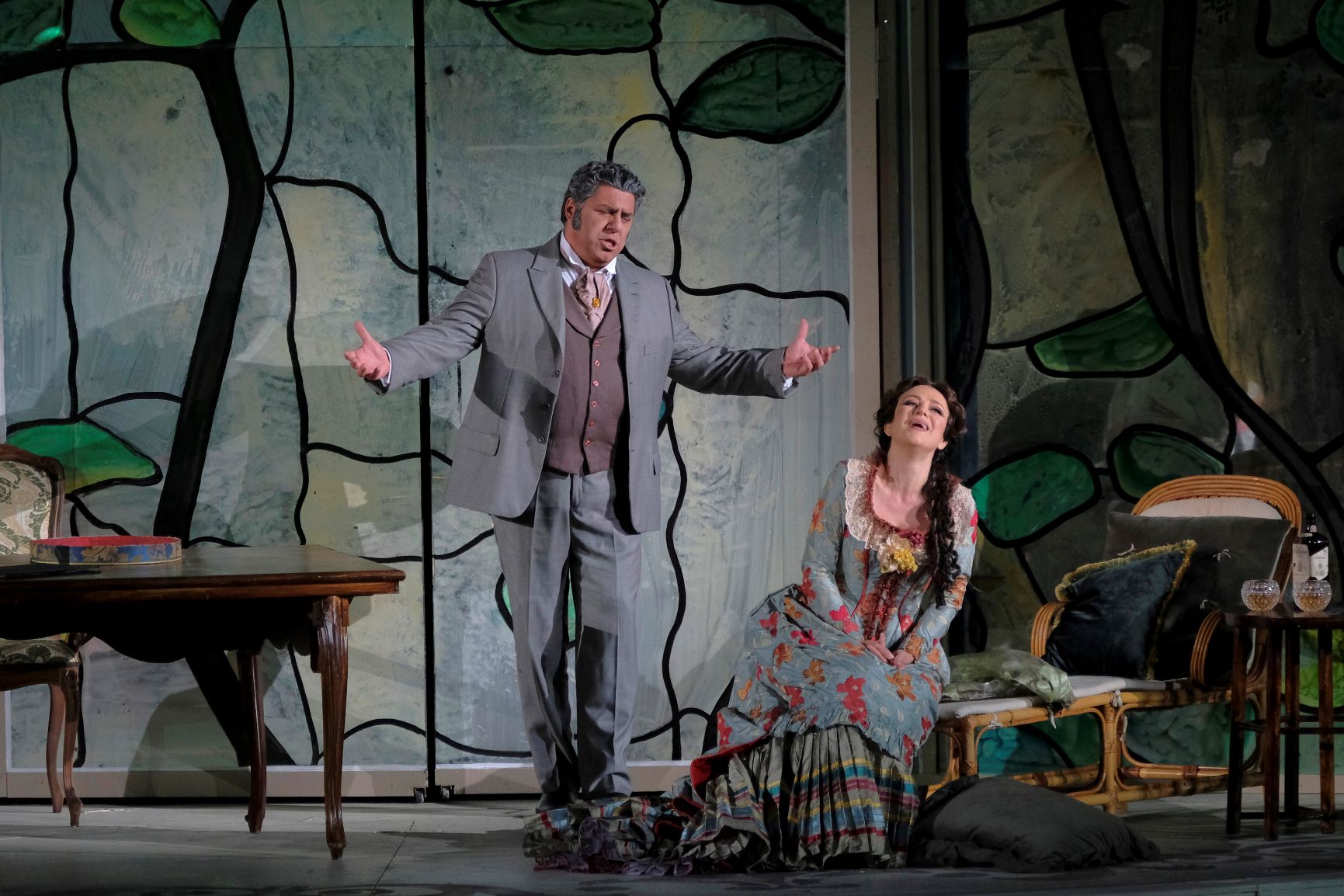 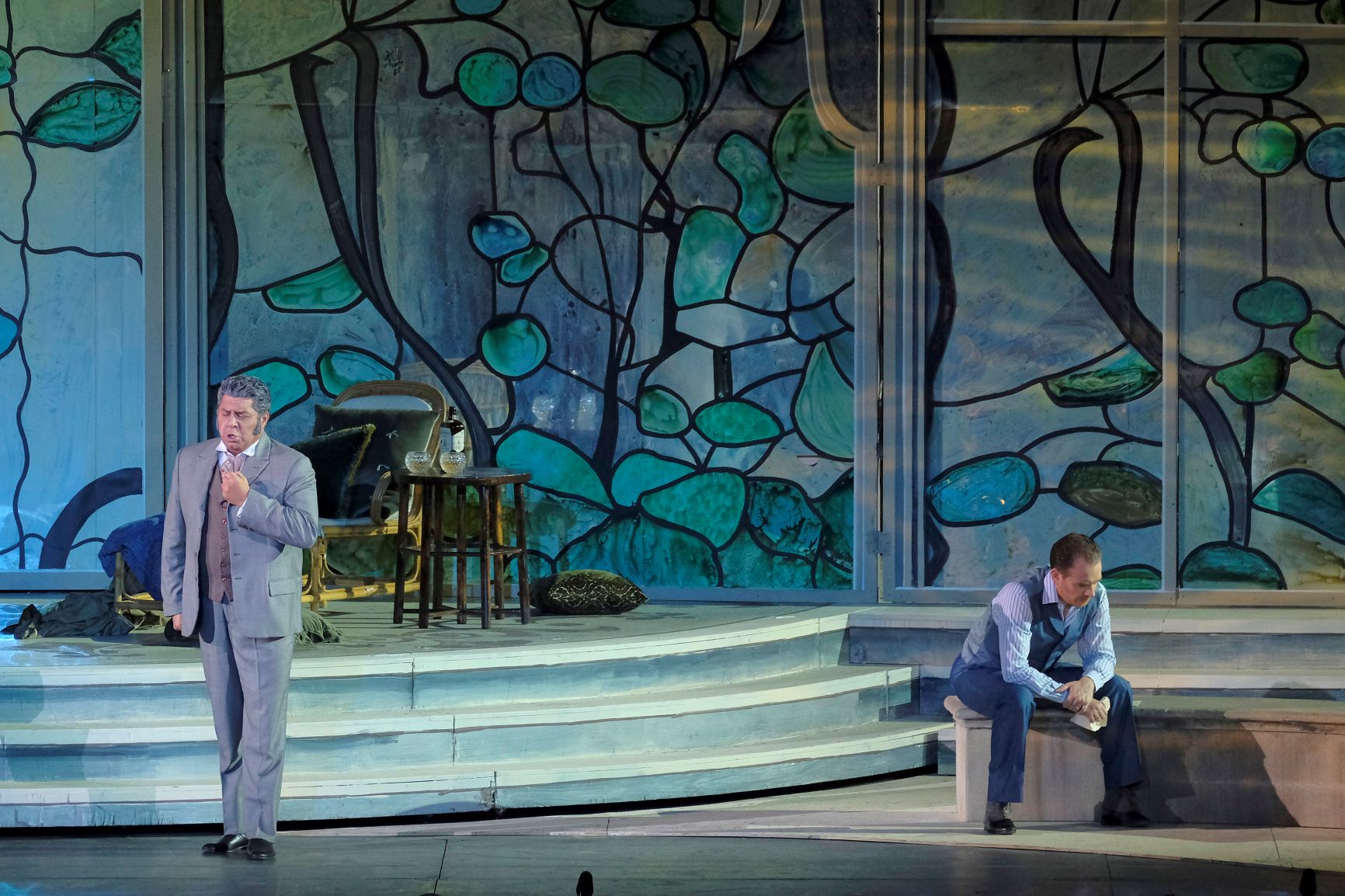 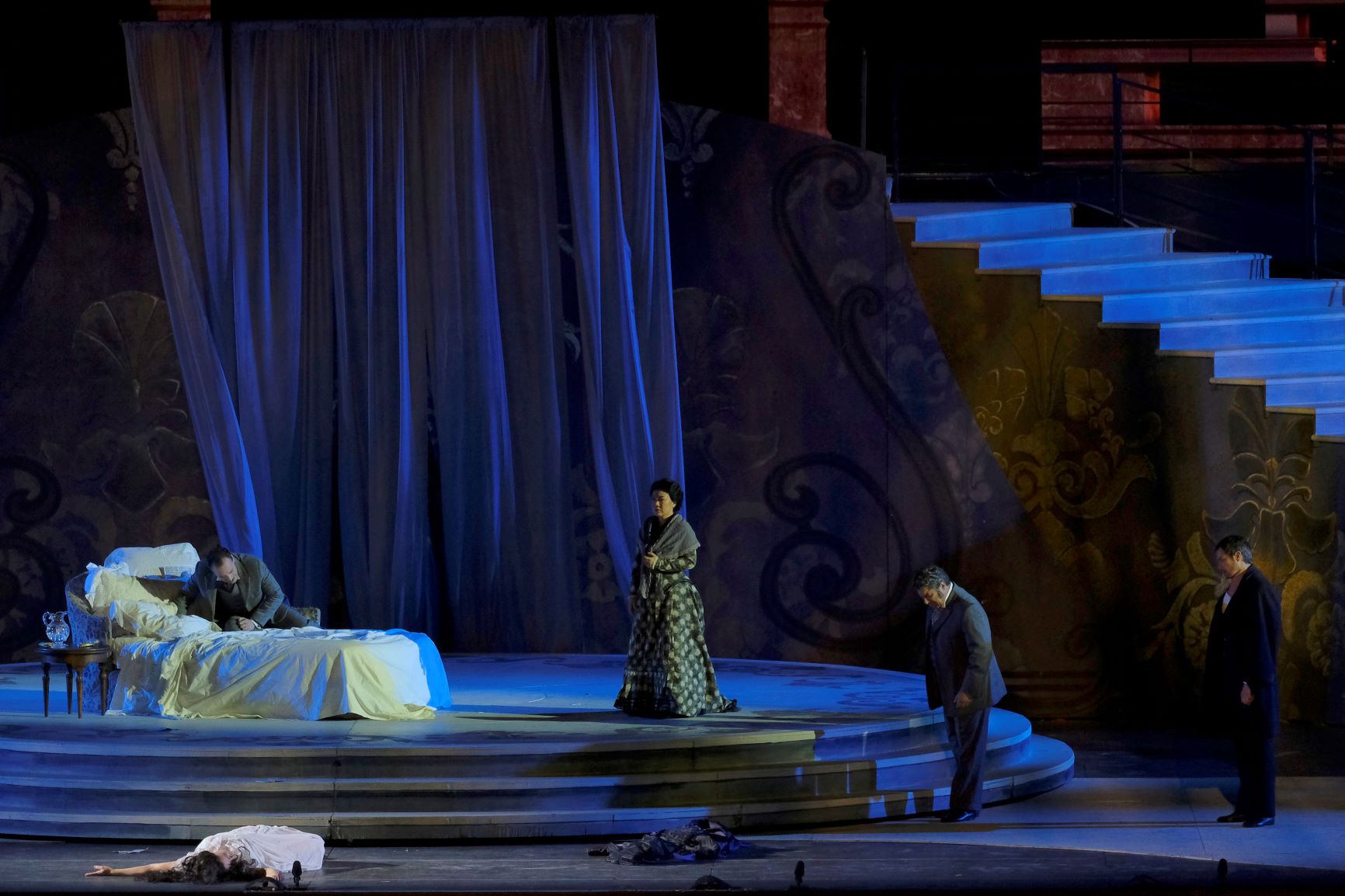 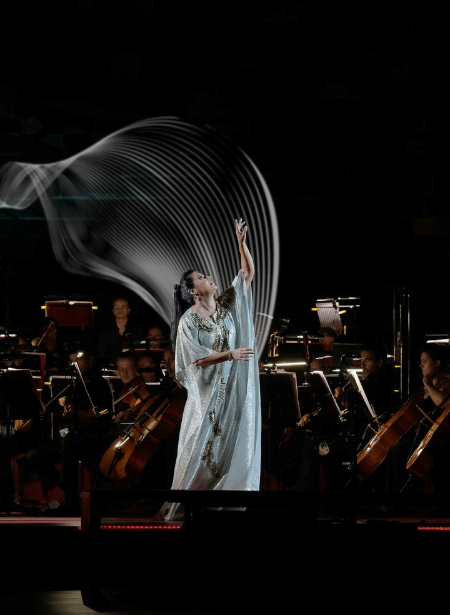