A season that will feature the operas, dates and stellar casts originally scheduled, starting with the eagerly awaited return of Riccardo Muti 41 years after his only appearance on the Arena’s podium.

For the 2021 Festival, Fondazione Arena confirms the strong will to realize its program, under the banner of a rebirth involving the entire city, and proposes a calendar with imposing and ethereal productions and sets, confirming the Arena’s spectacular tradition and which only the Arena is able to create, but are completely new and compatible with distancing due to health reasons.

In total compliance with the safety measures, like a true artistic collective, Fondazione Arena di Verona will produce five new productions that are light and less architectural but more technological than traditional ones, and feature the use of spectacular innovative video projections, ideal for “clothing” the Arena’s impressive setting. The health problem therefore becomes an opportunity for interpretative renewal, and bears witness with hard facts to the excellent work by the Arena’s various departments, who will show their skills by realizing every new production with great teamwork.

With great attention for the Arena’s spectators, who for a year have shown their love for the Festival by continuing to purchase tickets for the 2021 Festival, resulting in sales figures that are already important. 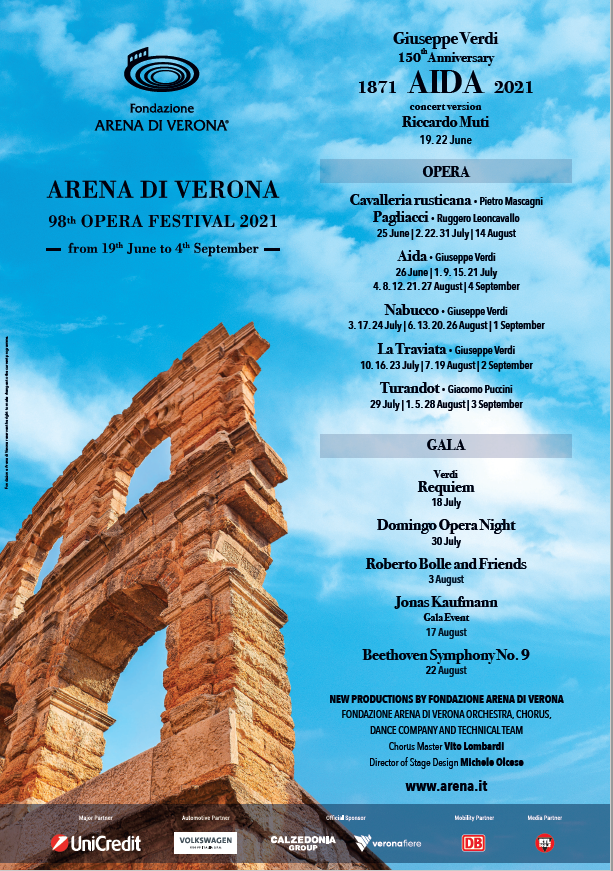 Every single production department of the Fondazione Arena di Verona will therefore join forces with a creative team spirit, bringing to life unique new productions that are lighter from an  architectural point of view but are, as always, able to respect the Arena’s complex structure and the impressive grandeur of its spaces, perfect for visual art’s new technologies.

A unique choice on the current European scenario that reconfirms the fact that work at the Arena has always had a collaborative vocation and offers all workers a fascinating challenge, showing how the’ problems faced in the last edition have reinforced the Arena’s driving force.

The stage will thus return to its original position and new technology will be integrated with the tradition of the historic iconic productions that for over a hundred years have made opera at the Arena unique worldwide: an aesthetic and dramatic revolution that will safeguard artists and technicians from all risks, but nevertheless ensure the spectacular grandiose shows that audiences have always expected at the Arena. The leitmotif of this new project and its variations on the various shows will soon be revealed, also finally enabling the Arena’s precious specialist workers to be seen and heard in their new role as protagonists in the creative process.

The Mayor of Verona and President of Fondazione Arena di Verona, Federico Sboarina, states: “We are very proud to present the 2021 season of the Opera Festival, a result for which I must thank the entire management of Fondazione Arena and the members of the Board of Directors. During this long, complicated winter, we never stopped working, in spite of the economic and organizational uncertainties.

After exactly a year from the first lockdown, the situation is still very serious. There is a lack of certainty regarding the future and what we shall experience in the coming weeks and months. However, like last year, even if with even greater difficulties due to a year of crisis, Fondazione Arena is ready to start again.

For the special 2020 edition, an incredible effort was required, postponing until this year the festival that had been programmed prior to the pandemic. A year ago, we were convinced that the emergency would have ended by the summer of 2021, but on the contrary we still have to cope with an equally complicated situation. Nevertheless, as promised, this year we shall do what we said to ensure the lights go up on the Arena’s stage. A challenge we want to win with innovation, extraordinary commitment and the courage that distinguishes us and enabled us to turn on the music even in the horrible Covid year. We want to continue to be the reference point on the international music scenario. On 19th June the inauguration with Maestro Muti will be an unbeatable new start for a season that promises to be truly extraordinary.”

General Manager and Artistic Director Cecilia Gasdia sums up the long considerations and actions of the last year as follows, “Our priority during these last very difficult 13 months was to safeguard culture, music, art, theatre, the Arena’s international image and the work, by both Fondazione Arena staff and the large community of artists and freelance workers, who are the greatest assets of every theatre throughout the world. I felt the responsibility of bringing to life artistic seasons that conferred further quality to the Arena’s touch and imprint, in spite of the hundreds of difficulties, to carry a legacy of esteem and prestige unscathed towards the future. Then there was the responsibility towards the city’s economic fabric, which, as a Verona citizen, I really must always keep at the top of my list of considerations: the city is watching us and waiting for us and we are aware of this here at Fondazione Arena. This year more than ever before, being General Manager for me means being the “helmsman” of a community that is both local and international, also including in this consideration the numerous spectators from all over the world who have trusted us, continuing to purchase tickets, in spite of the world’s great uncertainties. This year more than ever those who have the beautiful profession of working with culture have been required to reason firstly ethically and then in a strategic manner. Fondazione Arena di Verona reasoned in an ethical manner, with joy and conviction, because the action taken this year to support our cultural heritage and our international role will be judged on history’s stage. And, to quote Chateaubriand, we must consider ourselves in the perspective of our own posterity.”

General Director Gianfranco De Cesaris expresses his satisfaction “In the total cooperation on the project of the 98th Festival, thinking of the integrity of the Fondazione, cultural institution and economic driving force of the city of Verona, I am proud of the creative effort our team has made in terms of innovation and I am certain that this will mark a new start for us and our local territory.”

The participation of great couples on stage as well as in life has been confirmed, from Anna Netrebko and Yusif Eyvazov, who, following the extraordinary experience in 2019, return for three unmissable performances of Turandot, to Roberto Alagna and Aleksandra Kurzak, together for a very rare performance in both the roles of Cavalleria rusticana and Pagliacci. Also to be remembered is the eagerly awaited debut of Jonas Kaufmann and the welcome return of stars Plácido Domingo and Roberto Bolle, true idols of the Opera Festival. There is also great expectation for the return to the Arena stage of Katia Ricciarelli in the role of Mamma Lucia in Cavalleria rusticana.

As well as these events, already programmed for 2020 and rescheduled in 2021, on the occasion of the 150th anniversary of the world premiere at Cairo Opera House in 1871, Fondazione Arena has added an extraordinary inauguration with Aida, the Verdi masterpiece and Arena audiences’ most popular opera, which promises to be a truly unique event, thanks to the participation of Maestro Riccardo Muti, a worldwide ambassador of Italian culture. To mention just a few, the star-studded cast of the two evenings (19th and 22nd June) features soprano Sonya Yoncheva, in the role of Aida for the first time in her career, Francesco Meli as Radamès, Anita Rachvelishvili in the role of Amneris and Riccardo Zanellato in the role of Ramfis.

Another rightful tribute to Giuseppe Verdi, on the 120th anniversary of his death, is his Messa di Requiem conducted by Speranza Scappucci, an internationally acclaimed artist on her Arena debut. The Arena’s podium will host the great expert batons of Marco Armiliato, Daniel Oren, Francesco Ivan Ciampa and Jader Bignamini, alongside the eagerly awaited debuts of Diego Matheuz and Jochen Rieder.

Furthermore, it must be emphasized that this past year, the closeness and support of all our sponsors has been more important than ever and we wish to extend our most sincere thanks to them: Unicredit, Major Partner for over 20 years, Calzedonia Group, Volkswagen Group Italia, Deutsche BAHN, Veronafiere and RTL102.5, plus A4 Holding, Air Dolomiti, Casa Vinicola Sartori, GrandVision, Metinvest, SABA Italia, SDG Group, Vicenzi.

Your support to the Arena di Verona performances